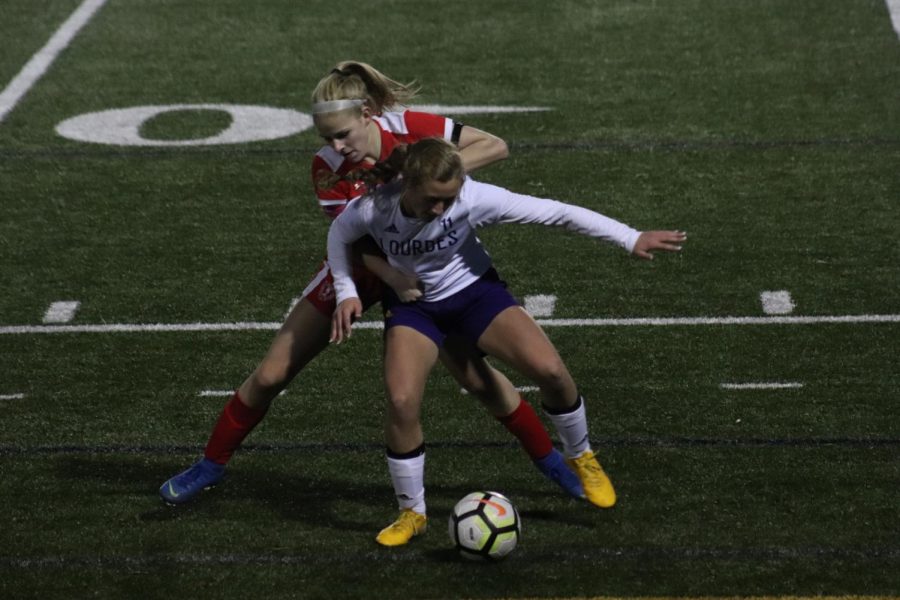 In the first round of the 2018 State Tournament, the #3 BSM girls’ soccer team faced #6 Rochester Lourdes Eagles at Prior Lake High School. The Red Knights got off to a hot start and never looked back, going on to win 3-0.

In their section tournament, BSM outscored their opponents 7-1, and they were looking to continue that dominance in tonight’s game while at the same time not trying to underestimate their competition. “Heading into the game, I just wanted to pump the team up because I think some of us were underestimating them [Rochester] and I didn’t want us to go in thinking we were going to win,” senior captain Amanda Cassidy said.

BSM set a fast pace, with an explosive offense early which helped them head out to a 2-0 lead only 20 minutes into the game. “After the first goal I was really happy and proud of Elizabeth, she’s been playing so well. After my goal, I was happy to have a larger lead, to just feel more comfortable,” Cassidy said.

Although BSM controlled the play most of the game, the Eagles did put on some pressure in the middle of the 2nd half hoping to get some momentum with a goal. Unfortunately for Rochester, senior goalkeeper Annie Pohlen stood in the way, making several crucial saves, including a rocket shot that was going upper 90 before Pohlen dove and deflected the shot. “I felt pretty excited about the save, in retrospect if I had let that in it wouldn’t have mattered since we ended up scoring again, but for a while were dominating there in the second half so keeping them shutout felt good,” Pohlen said.

Following this 3-0 shutout BSM heads to the US Bank where they will face Orono next Tuesday with a trip to the State championship game on the line. “Going into Orono I just want to focus on getting the team excited and ready. We tied them earlier in the season so it could go either way, but from what I’ve seen, when my team comes ready to play we don’t settle for losses,” Pohlen said.