Five freshmen made the girls’ varsity soccer team this year. They reflect on what it is like to play with upper classmen and the varsity experience. 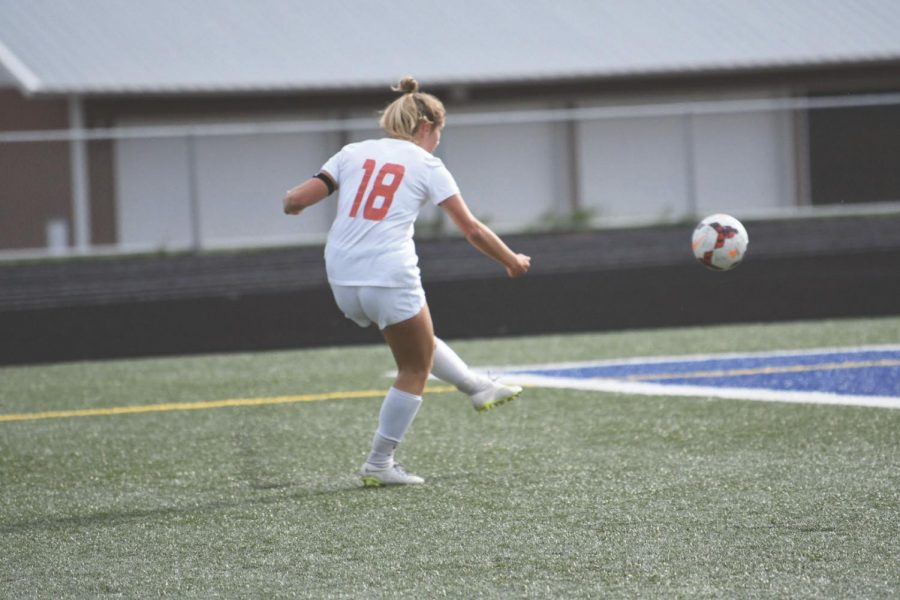 Freshman Avery Richardson plays for the varsity girls' soccer team as a forward.

Being a freshman on a varsity sport isn’t an easy thing to accomplish, but the hard work and dedication of five freshmen soccer players have done just that. Sydney Drees, Avery Richardson, Ashtyn Lowenberg, Kaia Ballinger, and Elizabeth Dietzen made the girls’ varsity soccer team this year.

Being a freshman on the girls’ varsity soccer team can be stressful; young players face increased expectations like keeping up with the seniors during drills or showing that they belong on a team with people who are three years older than they are. “It’s a challenge to prove yourself to the older players,” Lowenberg said.

The intimidation begins even before the season at tryouts. “Going into tryouts, I felt very intimidated by the varsity players because I had to play against them, and I wanted a spot on the team so bad,” Ballinger said.

These girls have different ways of dealing with the pressure; Richardson prefers to avoid it. “I don’t really think about it and just play my game like I know how to, ” Richardson said.

Ballinger focuses on staying positive, even when there is the added pressure of messing up on game day. “I keep thinking positive and work the hardest I can when playing. A big thing they ask of us is to just work hard,’’ Ballinger said.

The older players sometimes make assumptions about younger players. While these assumptions might sometimes be positive, they may also be negative. ”People think you’re as good as anyone else,” Richardson said.

The truth is all these girls have been playing soccer for a considerable amount of time. For example, Ballinger has been playing since age ve. “My parents put me in around eight years ago and I was good; ever since then I loved the sport,” Lowenberg said.

In addition to hard work and years of experience, these players have similar role models that inspire them to do better. “My dad [is my role model] because he’s really successful, works hard, and sets a good example,” Ballinger said.

Like Ballinger, Dietzen also credits a parent role model for her drive to become better. ” My mom … gets a lot done and has four kids [but still] manages to get her work done,” Dietzen said.

Despite the ups and downs, there are many enjoyable moments of being on the team, and team bonding is an important aspect of the team, especially because these girls will most likely be playing with each other for the next three years. There are many ways team bonding happens. “[My favorite memories are] hot tub talks which is basically team bonding,” Richardson said.

Plus it’s good for the athletes to remain optimistic and see the advantages of playing with more experienced players. “You get exposure playing with bigger, more developed girls,” Drees said.

The girls all have high hopes for the end of the season as a team and all have the same goal. “I really want to go to State,” Drees said.