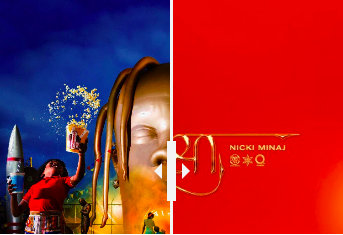 The pop music sphere has been blessed with two of, arguably, the biggest names in rap music, releasing albums at the same time. Travis Scott has released his highly anticipated ‘ASTROWORLD,’ a psychedelic, strange, bizarro take on modern rap music. Nicki Minaj released ‘Queen,’ her most rap-oriented album meant to solidify Nicki’s spot as the queen of rap. Travis Scott is known for breaking out into the scene in the early 2010s, with his rise to fame heavily supported by acts like Kanye, T.I. and Young Thug. Nicki Minaj is best known for songs like “Starships,” and has worked closely with artists like Drake and Lil Wayne. Today, we’ll compare the two albums to see how they stack up against each other.

Nicki’s album is certainly more pop-oriented in terms of structure. Intros, verses, and choruses are repeated throughout the album. Variation is very sparse, and you don’t expect a whole lot of changes. Travis Scott’s album is a lot more unconventional. Songs like “SICKO MODE” and “ASTROWORLD” radically change their sound and beat throughout the song. I gotta give it to Travis on this one. He’s trying something different, and when it works, it works wonders.

Second Round: Flow and Lyrics

Travis’ flow is smooth and lethargic, similar to Migos or 21 Savage. He doesn’t mix words a lot or rely on lyrics that are clever or self-referential. Nicki’s flow is a bit faster and choppier similar to Eminem or Busta Rhymes. Nicki’s lyrics very clearly focus on other rappers; she calls out rappers like Drake, Meek Mill, and Young Thug. Travis’ lyrics are certainly more trashy as they focus on partying and having fun, while Nicki’s lyrics somewhat uncomfortably rely on making fun of the insecurities and quirks of other rappers. I think Travis wins here because his hedonistic lyrics are somehow more respectful of others.

Nicki’s album has a little bit of everything; mainstream trap, tropical pop, hip-hop, and R&B. The wide variety of styles and genres makes “Queen” seem more diverse, however, the album lacks a cohesive sound. Travis’ album focuses more on trap, but with a lot of strange synths sounds drenched in reverb, delay and all sorts of interesting tone-changing effects. However, Travis’ overly similar drum beats on the first three songs, and several later in the album, really drive me up the wall. I actually started rhythmically banging my head against a wall during the 3rd song when I heard the same bass pattern. Producers like Thundercat and Tame Impala give a lot of character to Travis’ album, and the beats on “ASTROWORLD” are generally really appealing. Travis wins.

Both albums had a lot of hype behind them. Travis Scott being the 24th most popular artist on Spotify is absolutely a factor. I think “ASTROWORLD”, despite its faults, lives up to the strengths Travis displayed as a collaborator and producer on Kanye West’s “Yeezus.” While “Queen” doesn’t quite show the crossover star power Nicki had before. I have to give the final round to Travis. He’s cemented himself as more than just a rap feature and co-producer. Whilst Nicki seems to struggle with living up to the image of a queen.

The final score is Travis’ 4 to Nicki’s 0; Travis wins. I admit I liked “Queen” more than I thought I would. However, “ASTROWORLD” builds so well upon the rest of Travis’ discography that it makes it hard to see the half-hearted effort of ‘Queen’ as anything special.