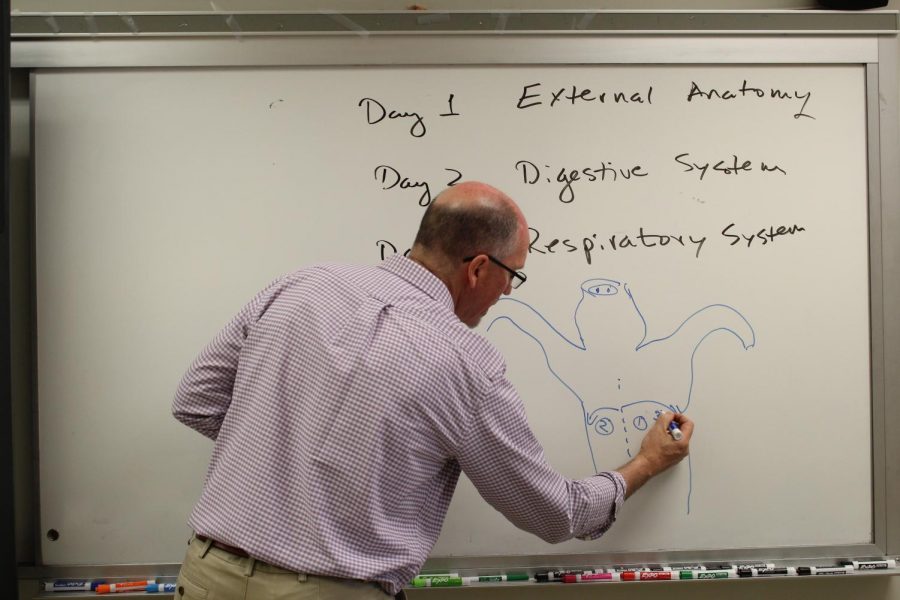 A couple of teachers at BSM have started to ditch the letter grade system. For example, science teacher Mr. Mark Peterson grades his students by how well they learn, not how many they get right on a test or on homework.

A few teachers at BSM are trying to start a change involving the grading system that BSM follows. Many might disagree with the one used now, but few do something about it. Mr. Daniel Sylvester has been able to take the matter into his own hands.

Outside of his help desk duties, Sylvester is one teacher of the 8th grade American Experience class. His main goal is to change the gradebook to a number system. Although Sylvester is unable to completely change the gradebook, he can do as much as he can. Sylvester uses a number system consisting of five separate points that starts at zero and ends at four. Zero exemplifies no evidence of learning, while a four exemplifies mastery of the course. At the beginning of the course students won’t have as much knowledge of the concepts taught, so they will start out at a one or zero, but over time they will build their way up to higher numbers. “By the end of the year, you’re an A student because you’ve had more practice, that’s the idea behind it,” Sylvester said.

Alongside Sylvester in the American Experience class is Mr. Josh Belanger. They both co-teach the class and agree upon their grading system. Belanger is even trying to start implementing it into other classes of his. “Nationwide there are a bunch of schools doing it,” Sylvester said.

In the senior high, science teacher Mr. Mark Peterson uses a similar system of numbers instead of letters as well. “It compresses the grading scale. There’s a range from zero to sixty of failure, so how many degrees of ‘F-titude’ do you need,” Peterson said.

While these teachers rave about this new way of grading, not every student loves the new system. “To be honest, it’s really confusing and hard to understand,” Gabe Vogel, an eighth grader in the American Experience class said.

Vogel described the new grading policy with fairness. “We have learning targets, and you have to meet the criteria of the learning targets in order to achieve the score you want,” Vogel said.

Letter grades are still and probably will be used for a while nationwide as the default grading scale. Starting as early as the late 19th century, letter grades have remained the basis of how colleges select their students it’s definitely hard to change something that has been in place for so long. Sylvester doesn’t deny that letter grades are necessarily a bad thing either. “I think the familiarity of letter grades are good because it’s been around for so long. I don’t think it’s an evil thing,” Sylvester said.

Overall, this new way of grading students is trending, and could be the future. Who knows what the future holds with this grading system. “With the letter grades there’s a 60 point range of failure, while there’s only 40 points of success in theory. Mathematically it’s more accurate to have a smaller, more evenly spaced scale,” Sylvester said.