Lebron James has been dominant in the NBA ever since he stepped on the court. 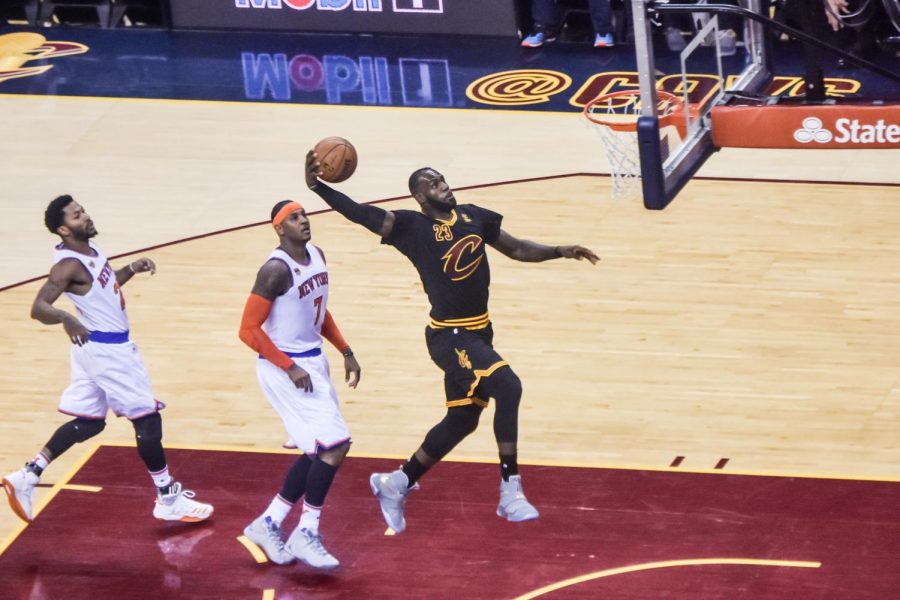 Lebron James is not only the best basketball player on the planet but the most powerful athlete on earth.  Fueled by his competitive edge and desire to win, Lebron James has made a name for himself by being the best player in the National Basketball Association and the face of the biggest sports company in the world: Nike. He is the one player in the NBA that no one wants to play against, that has undeniably outstanding statistics and trophies, whose name is known by every person in the world.

Lebron James had an instant impact on the NBA as a rookie. Shortly after he was drafted, James signed several endorsement deals, including a $90 million deal with the biggest sports company in the world: Nike. James completed his first season with an average of 21 points per game and was awarded Rookie of the Year, his first of many awards in the NBA. Over the next seven years, James was a six-time all-star and made five playoff appearances, yet never won a championship. He was the back-to-back MVP in 2009 and 2010, leaving no doubt in anyone’s mind that he was the best player of his generation.

In the summer of 2010, Lebron James left his hometown team and traveled south. James played for the Miami Heat for four years, reaching the NBA Finals every year and winning back-to-back championships and MVP awards in 2012 and 2013. After four years in Miami, Lebron James returned to Cleveland. The people who burned his jersey waited in line for a new one. He has been back on the Cavaliers for three seasons, playing the Golden State Warriors three times since in the NBA Finals, and winning once.

The only other player in NBA history that had a level of domination over the league comparable to Lebron’s is Michael Jordan, who most people consider to be the best ever. However, Michael Jordan only averaged 2.9 more points per game than Lebron James, while Lebron James averages 1 rebound and 1.6 assists more per game than Jordan, showing that he is a better all-around player. Michael Jordan also only appeared in six NBA finals while Lebron has already been to seven, and although Jordan won all six, he had the help of another all-time great, Scottie Pippen, while Lebron has led his teams single-handedly. Scottie Pippen, who was Jordan’s teammate in all six championships, has even recognized Lebron’s greatness, stating: “Michael Jordan is probably the greatest scorer to ever play in the game, but I may go as far as to say LeBron James is probably the greatest player to ever play the game” (International). The best basketball player of all time will always be debated, yet it is clear that Lebron James is the best all-around player ever to play the game.

Lebron James has played in all of the last six (about to be seven) NBA Finals, has won three times and has a networth of $450 million.  In a classic rag to riches story, James was raised by a sixteen-year-old single mother, but he used his athletic ability to create a future for himself. James had an instant impact on the NBA and has used his superiority to take control of the league. Clearly, because of his desire to win, his basketball skill, and his overall domination of the NBA, Lebron James is the most powerful athlete on earth.