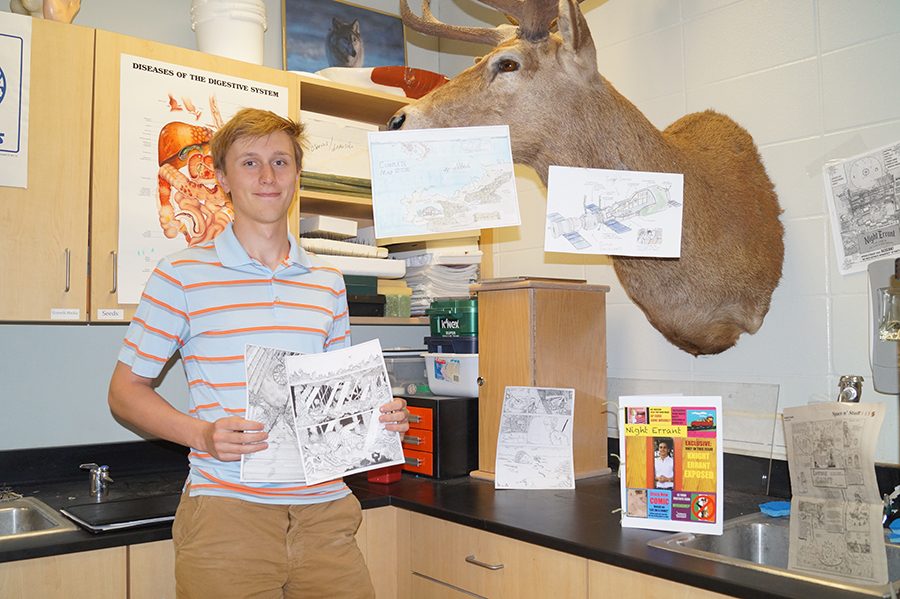 From writing the immensely popular “Night Errant” to creating epic science fiction comics to even creating a nuclear fusor in his basement, senior John Beutz is someone who seems to be able to do anything. Throughout his high school experience, John has lent his physical prowess, intellectual capabilities, and personalized humor to every class, activity, and project.

In high school, John played on both the football and track teams, although he is the first to admit that both of these experiences were short lived. “I played football, but I was critically injured by Eric Wilson, and I never played again. I played track, but Patrick Kalb made fun of me, so I stopped,” John said.

One of John’s main passions is science, and he has read dozens of novels and papers from famous scientists and theorists. His interest in science has also led to his love of reading science fiction, which led him to take Ms. Tiffany Joseph’s Science Fiction Literature class this year. “Sci-Fi Lit is my favorite class that I have taken thus far. It was the crucible in which steel was formed from the raw iron that we were before. Sci-Fi was the reckoning, after which all was different, all was changed, nothing remained. Some say the world ended in 2012; my old world ended when I stepped into Sci–Fi Lit my first semester senior year,” John said.

John has taken his interests in science far beyond the page, however. His junior year, John built a literal nuclear fusor in his basement. “My interest in physics led me to a fusor website, where lots of people would build strange nuclear devices and exchange the materials necessary to build them and to discuss the theory and practice of the operations of such devices. Subsequently, I decided to construct one of these things for myself. It was a long and arduous path that required a significant amount of money to be earned and spent. The project was multifaceted because it made me learn machining techniques, eBay buying, and stuff like that. All of the technical side of the final product was building the fusor, ” John said.

This year, John’s habits went back to his roots, as his passion for drawing that he had as a child came back to him. Joining together several of his passions, John used his artistic skills to draw science fiction comics for both his Science Fiction Literature class and for the Knight Errant. After spending a semester and a half on the staff, however, John felt that it was time that he branched out, and he started his own publication: The Night Errant. “[The Night Errant] was another hobby of mine, and its content became very not subtle parodies of stuff from the Knight Errant. This was my all absorbing hobby for the two weeks that it lasted before, quite reasonably by mutual decision, being put on temporary hiatus to avoid the fate of many such projects of mine, which is suspension,” John said.

Next year, John will be attending the University of Wisconsin Madison, where he hopes to study physics and English.