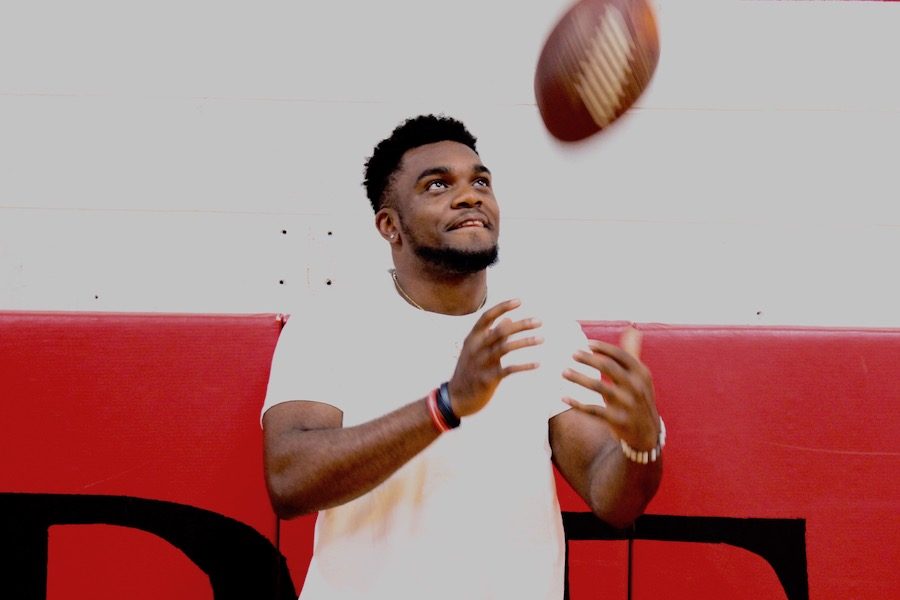 Ikenna's performance in sports, singing, and as a friend are only some of the attributes that make him fabulous. Next year, Ikenna will be attending Winnona State University and playing on the football team as a linebacker.

Ikenna Ujuagu has impacted the community of BSM in the most positive way possible for the past six years. Ikenna walks into school every day with a smile on his face and spreads kindness all around. People may not expect this from Ikenna, considering he plays football and wrestles, but Ikenna’s friends can speak to the fact that he is one of the most genuine people in the senior class. “Ikenna showed me how to be a hard worker and a good friend,” senior Gabe Alada said.

One of Ikenna’s various passions is football, evident through his hard work that has earned him a stop as a linebacker at Winona State next year. After talking to the coach one-on-one, Ikenna visited the campus and decided he wanted to spend his next four years there. “I was one of the top athletes in the state, and the coach at Winona State saw that I hadn’t chosen a school yet, so they DMed me on Twitter. The coach then came to BSM and talked to me in February,” Ikenna said.

Ikenna has been playing football since fifth grade, and throughout the years, it has really impacted his life. The coaches have been big influences in his life, especially Coach Joe Creer. “Coach Joe is always there to help me. He is always very motivating too. He always keeps it real and people like me need that,” Ikenna said.

Along with his football coaches, his mother has been a big inspiration in Ikenna’s life. “She has been through the hardest of times, but she still seems to make everything better,” Ikenna said. Ikenna’s kind heart is especially evident through his relationships with his brothers, who are four, two, and one years old. They are extremely important to him, and he is always conscious of the influence he has in their lives. “I always want to make sure I am the best influence on them that I can be,” Ikenna said.

Although his talents and attributes seem nearly endless, Ikenna can describe himself in just three words: “Humble, hardworking, and shy.”

While Ikenna is well known throughout the senior class, he also has his fair share of hidden talents. “Not a lot of people know this, but I can sing,” Ikenna said.

Perhaps Ikenna’s singing talents are just one part of a larger taste for music, as one of his biggest hangups with BSM’s dances has been the music. Fortunately, this year’s prom was the best dance he attended in his years at BSM. “Normally the DJ’s music isn’t too hot, but this year I liked him,” Ikenna said.

One last thing Ikenna wants everyone to know about him is the reason why he carries around a jug of water everyday: “I like to stay hydrated. It’s good for me, and I always want my pee to be clear,” Ikenna said.