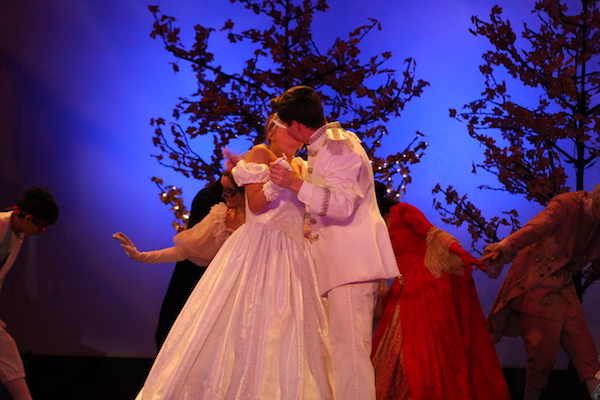 The BSM spring musical was held once again, and this year’s show was “Cinderella.” The play provided four showtimes, and it had a cast of 33 artists and 10 backstage helpers.

Senior Brielle Baker received the lead role as Cinderella for the play. She explained how often the cast practiced and when they started practicing. “We practiced everyday of the week besides the weekends from 3-6 p.m., and we started practicing around March 7th,” Baker said.

As the lead role of the musical there was a lot of pressure put on Baker to perform to the best of her abilities. She often felt very anxious and stressed about the play with all the pressure, but she knew that it was worth it in the end. “I’ve felt very stressed and anxious especially this last week, but even with that, it’s fun for me,” Baker said.

This stress and enjoyment of theater isn’t new to Baker. She has racked up some other memorable roles in previous BSM plays, and was in plays through her middle school years as well. She was the lead in the musical Alice in Wonderland, which showed last year, and was in the musicals Adams Family and The Drowsy Chaperone.

This year, BSM’s theatre department used their school’s resources to their full advantage, and recruited four of the school’s very talented dance team members to participate in the musical. Although none of them had many speaking lines, they added a lot to each song with their dancing experience. Senior Sarah Hansberry was one of the dancers and talked about how much fun it was to use her dancing somewhere else besides dance competitions. “I’m currently living,” Hansberry said.

As a character in the play as well, Hansberry expressed how much of a challenge and joy it was to experience live acting as well. Because she was in the ensemble, she had many costume transitions throughout the play. “I’m the fox, footman, and female ensemble…it’s really fun, but I have to be in a box when I’m the fox and my body cramps up as I’m in there, but it’s fun to change characters,” said Hansberry.

An essential to every musical is live music, and the choir director at BSM, Nancy Stockhaus, took the role as the music director this year. For the music, they used an adaption of the musical’s original music, which was written by songwriters Richard Rodgers and Oscar Hammerstein. The musicians practiced as frequently as the actors, practicing from 3-6 every week day, for six weeks. Stockhaus has had plenty of experience as the musical director at BSM, making her an asset to a successful musical. “I have been music director for the musicals since 1998, so I have done close to forty musicals for BSM. I love this aspect of my job, as I was an actor in musicals before becoming a teacher,” Stockhaus said.

She expressed how much she loves the process of every musical she does, and how there is always a learning experience with each one. “There are always so many incredible learning experiences and growth through this process. I would say I love watching the progression of the cast learning all of the dancing, acting and singing and putting it together,” Stockhaus sad.

Some of the musicians that played at the musical were BSM students, with senior Mary Alice Hutton as a violinist, who will be going to the U of M to receive her masters in performance, and Maura Judd and Rebecca Twite playing the clarinet and flute. Stockhaus also hired a few professional musicians for percussion and trumpet.