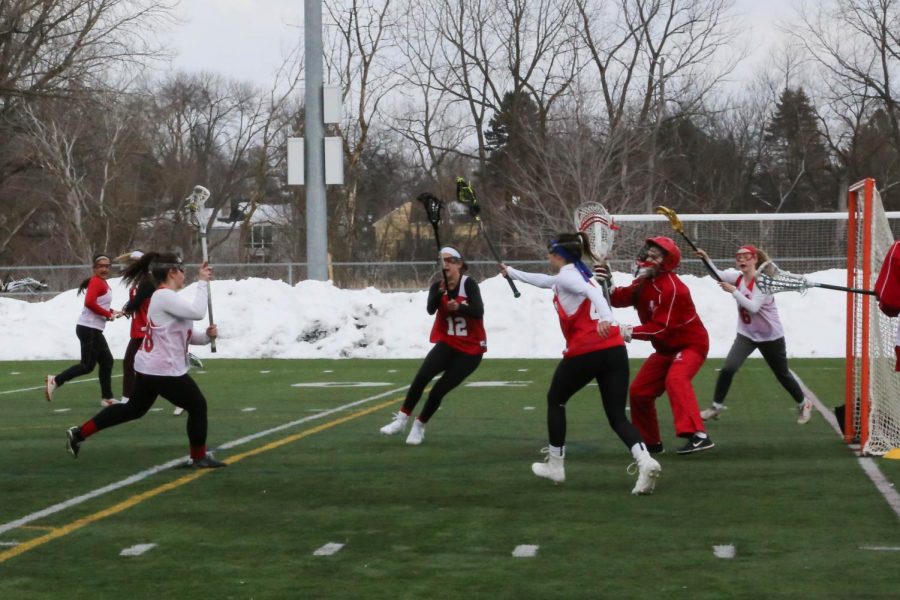 Despite the snow surrounding the field, members of the girls' lacrosse team get ready for the season. Personal workouts and captains' practices have been a part of their off-season preparation.

The girls’ lacrosse team is looking to bounce back from their Section Final loss this past season. With many seniors graduating last year, they are excited to start building up a new team and hope to end the season strong. Senior captains Sammy Deterding, Olivia Pohlen, and Mandy Nylander strive to be good role models to the younger players and bring the team together as one.

Since last season, the team has lost some valuable players and some of their main shooters, but they believe the new incoming team will make up for the lost players. “We don’t know our teams yet, but it’s looking good with these new incoming players,” Nylander said.

Besides the captains stepping up with their leadership roles and being a big asset to the team, the juniors also get to take on a big part. “The juniors also need to step up now that they are upperclassmen and be good role models to the younger players now that they’re going to play more,” Deterding said.

During off-seasons, the girls have had a lot of time to practice and improve their game. Besides captains’ parctices, they have all had many opportunities to get out and play. “We have had captains practices including players individually working on their stick and footwork. We also trained with Creer as a team after school by lifting and doing stick work,” Nylander said.

The team has set a lot of goals for themselves that they believe will make their team successful against their competitors. “We hope to have a winning record and get as far as we can in Sections, and we’re doing that by practicing every day and putting in time on our own to better our skills and for the team to success,” Deterding said.

Their line up for competition is looking out to be a good one. “Most of the competitor teams have lost their strongest plays, so we’re hoping to do well against them,” Nylander said.

For the seniors, especially the captains, they want to end strong and are excited to play their hardest for the last time. “I’m excited to bonding with the new teams and getting the new players. Also since this is my last year playing, I want to finish strong and make it a good last season,” Deterding said.