BSM boys’ tennis hopes to have another strong season 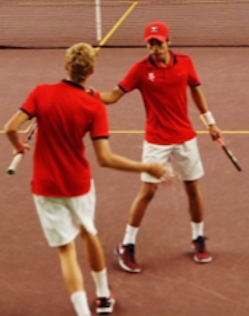 The boys’ tennis team is back after a successful season last year.  As returning Conference champs, the spring team hopes to accomplish all they did last year, and more. Led by senior captains Ryan Frost, Tristan Fjelstad, and Michael Hunter, the team strives for a State appearance.

Last year the Red Knights had an eventful year. They won their Conference for the third year in a row, but fell short in the Section Tournament in order to make it to State. “Our Section is comprised of Edina, Blake, and Eastview, which are all very good teams, so it makes it harder for us to go to State, but this year we hope to make a run,” senior captain Michael Hunter said.

Luckily, the roster only lost two players that graduated last year.  Being that a lot of key players are returning, this season definitely has a lot of potential.  “A lot of players won All-Conference and All-Conference Honorable Mention, so we have some talent returning for the 2018 season,” senior captain Ryan Frost said.

In addition to the returners, the team has some rising stars that hope to leave their mark on the tennis team early.  “There is a lot of new talent such as Mason Prest and Mitchell Kroll that hopefully will help the team this year,” senior captain Tristan Fjelstad said.

The State Appearance last year by doubles pair Tristan Fjelstad and Ryan Frost capped a successful season and also points to success this year. “Coming off a State Appearance sophomore year, we wanted to get back and we did. Taking home third felt pretty good, but hopefully my partner, Ryan Frost, and I, will go even further this year. That’s the goal,” Fjelstad said.

In order to prepare for the season, the captains held three captains practices to get the rackets warm and get back in shape.  “Captains practices were really good to get to know the team and see where everybody is at. We tried to keep them up beat because we want to get the kids hitting tennis balls and know each other. It helps us prepare as a team rather than individually, which is helpful,” Hunter said.

The home court of the BSM boys tennis team is Aquila Park, right off of Minnetonka Boulevard. “I like Aquila, but at the same time I don’t because most tennis courts have wind screens, but Aquila doesn’t.  I personally don’t like this, but it gives us a home field advantage because other teams aren’t used to the wind,” Fjelstad said.

The team begins matches April 12, starting with a tough matchup against Blake.