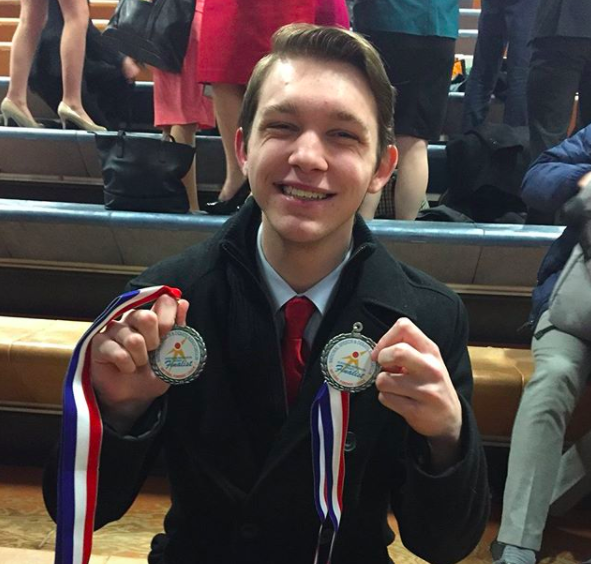 Senior Henry Bird qualified for the national tournament in the Extemporaneous Speaking category. Nationals will take place in Fort Lauderdale, Florida from June 17-22.

As the 2018 speech season comes to an end for most of the team, senior Henry Bird has extended this season by qualifying for the National Speech Tournament in Domestic Extemporaneous Speaking.

This June, Bird will be flying to Fort Lauderdale, Florida and competing in the NSDA national tournament. With students from all of the country attending, only an event’s top three competitors in each district’s qualifying tournament are invited to compete.

Since his freshman year, Bird has been a member of BSM’s speech program, competing in the category of Extemporaneous Speaking in all four years. “In Extemporaneous Speaking, you draw three questions about either domestic or international politics and then pick one to give a seven minute speech on. You have just 30 minutes to prepare, so thinking on your feet is a crucial part to this event,” Bird said.

Thinking on his feet is something that Bird has really improved on this season and has allowed him to reach such a high level of success. Bird earned three top three finishes this season at regional tournaments and placed 7th at the section tournament. “[Bird] works extremely hard and has grown to be an incredibly confident public speaker; also he has taken the amount of research that he does before meets to a whole new level,” speech coach Ms. Maura Brew said.

Brew, who was not necessarily surprised by Bird’s achievement, said she always knew he was capable of achieving this level of success. She was particularly impressed with his achievement after seeing how talented the other thirty speakers at National Qualifiers were. “Minnesota is one of the strongest ‘speech states’ in the country this year, so for Henry to advance to the National Finals from this state is a phenomenal achievement,” Brew said.

While Bird hopes to do well at Nationals, he is most focused on continuing his improvement by using this opportunity to watch some of the best extemporaneous speakers in the country and learning from them. “I really hope that by watching extemp. speakers from across the country I will be able to pick up on some of their strategies and incorporate them into my own speaking,” Bird said.

The best part of this whole experience is the chance for Bird to continue competing in the activity that he loves for a few extra months. “I have grown to love the category and getting to do it for a couple more months really makes all the hard work pay off,” Bird said.