Boys’ hockey players reflect on the end of their season 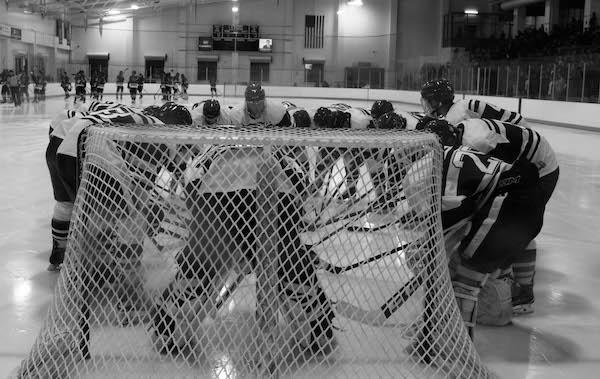 The BSM boys were coming off an undefeated conference record and a 4-0 win against St. Louis Park the previous week. However, when the first game of sections rolled around the results would not be as favorable.

The red knights took an early lead when Jett Johnson scored a goal early. The momentum looked to be in BSM’s favor, but as the period progressed they started to play more and more flat, “I think we were more nervous than the game a week before because our season was on the line,” junior forward Ian Bahr said.

About halfway through the second period, the Orioles went on the power play and scored to even the tally 1-1, continuing to change the tide in the favor of SLP. This ended the defense’s streak of 7 shutout periods and clearly flustered the players. “We definitely did not play as well as we could have…we should’ve focused more on the game than the result,” Bahr said.

The third period rolled around and both teams were tightly competing, vying for the go-ahead goal. The pace seemed to increase as the game transpired, and emotions were running high, “We talked about not getting retaliation penalties because that could potentially lose the game for us,” Bahr said.

This was clearly hard for the cross-town rivals to keep up as about halfway through the final period, a scuffle between two players broke out resulting in 2 major penalties given out and the St. Louis Park player to be ejected.

The period proceeded at a fast pace, both teams playing their heart out for their seasons were on the line. The clock kept ticking and ticking and both teams attack becoming stronger and stronger while neither team could find the back of the net. This trend ended with 23.9 seconds to play when SLP scored and ended the Red Knights season.

The loss was harder to take than most, especially considering the team that had just ended their season was the same team they had beaten 4-0 the week before. However, the Red Knights look to bounce back from the loss sections to SLP for the second year in a row next year, for they return to starters and 10 varsity letter winner. The future looks bright for the Red Knights hockey program.