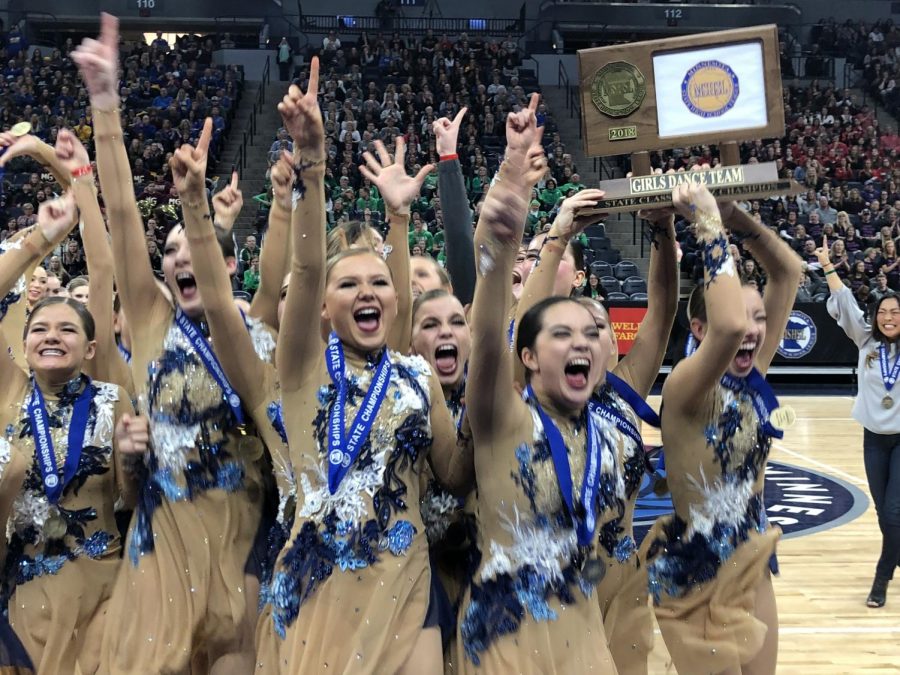 The long, hard, and enduring journey of being on dance team starts in April during tryouts and never really ends, but one thing makes all the hard work pay off: a State title. Over the last five years the Knightettes have taken home four State Jazz titles (14’, 15’, 17’,& 18’) and in 16’ they got second only behind Totino-Grace. This could be called a dynasty, to say the least.

After taking home a Section title, the Knightettes were rolling into State with lots of momentum. Leading up to State, the team was practicing every day and training hard.

At State there are twelve teams that compete in the preliminary round, then the top six make it on to finals and perform again. “After prelims, we were feeling pretty good, our coaches took our phones away so we would focus on finals, and they didn’t tell us what place we were in heading into finals but we were pretty confident in ourselves,” junior Caroline Pauly said.

With a two hour break between prelims and finals, the girls had a lot of time to think and get ready to dance one last time. “I was feeling pretty nervous but I knew that I just had to give it my all and hope for the best,” senior captain Sarah Hansberry said.

The girls danced their heart out at finals and had a stellar performance; they just had to wait another ninety minutes to be crowned State Champions. “Right after we had our last run all the stress was relieved and I knew from that moment that we had won,” Pauly said.

After the Knighettes danced, they went up top to watch everyone else compete, then after an excruciating wait, it was time for the AA awards to be announced. Juniors Molly Segner and Sydney Ryan were given all-state awards. “It was a huge honor for me to be given an all-state award,” Ryan said.

Only the top three teams were announced in order from third to first. Sartell earned third, while Totino-Grace was granted second once again. “It was a feeling that I can’t even describe, being a senior and knowing this was my last chance to win, I’m just so excited,” Hansberry said.