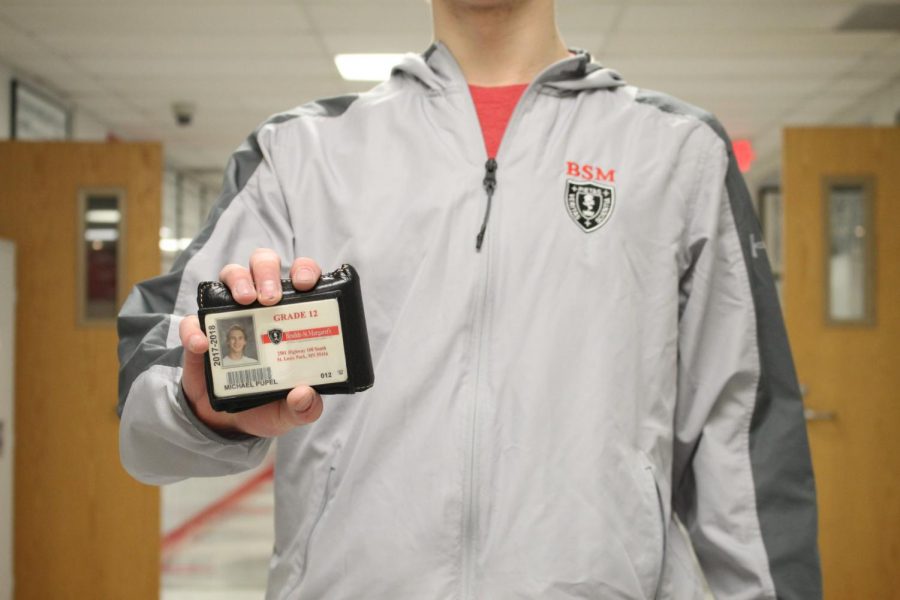 Seniors can now use their ID's instead of having to use classroom passes, as in the past.

As the oldest students in the school––headed off to college in a few months––seniors can earn privileges at BSM that give them more freedom. Members of the senior class met with student dean Ms. Mary Andersen in the chapel after Mass last Wednesday to discuss new privileges exclusively for second semester seniors.

This year’s senior class earned the privilege of using their BSM student ID’s as a hall pass instead of the traditional hall passes used by all other students. Andersen will be gifting all seniors with brand new ID cards in case students lost their original ones. “We don’t have students use hall passes because we don’t trust them, we use [hall passes] to keep the halls quiet… By the time you’re a second semester senior, you’re not as likely to go running through the halls making a disturbance, so it’s a good [privilege] to choose,” Andersen said.

Later in the semester, the senior class has the opportunity to earn the privilege of going outside during their free hour. Once the BSM maintenance staff determines that the BSM campus is under ideal conditions, the BSM administration will decide if the seniors have earned this privilege.

There are two more privileges given to members of the senior class on an individual basis: leaving early and skipping second semester finals. If seniors have seventh hour free on block days or eighth hour free on all other days, they may submit a request to be able to leave school early. On block days, seniors can leave as early as 1:05 pm. If a senior leaves early, they are not allowed to return to the BSM campus until 5:00 pm and are not permitted to participate in after school sports or activities. Then at the end of second semester, seniors have the opportunity to skip their finals. Seniors must have above a C in each class, no more than three tardies, no unexcused absences, and no more than four absences per class to skip their finals.

In addition to speaking about the privileges of being a senior at BSM, Andersen spoke about leaving a good legacy at BSM and setting a high bar for future classes. Most importantly, seniors are expected to set an example for younger students and show that they care about other students.  Andersen believes that this year’s senior class has shown exemplary leadership and has no doubt that seniors have earned their special privileges. “This year I have been made aware of an inordinate number of seniors being kind to young kids in the building… it’s not just caring about [others], but then putting it into action,” Andersen said.