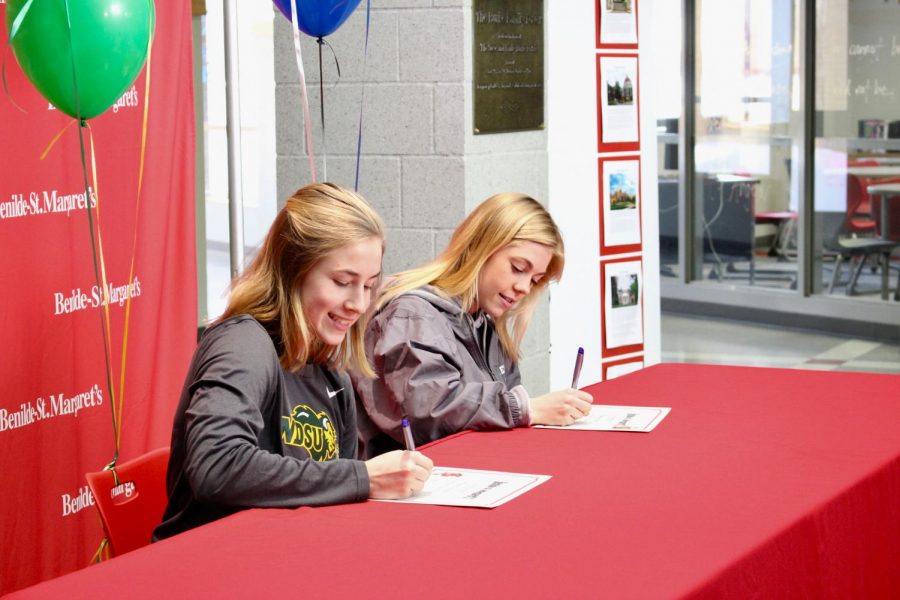 Every year, BSM celebrates seniors who sign commitments to college sports. On Thursday, February 8, two BSM soccer players signed their commitment to play division one soccer. Claire Grazzini, goalie on the BSM varsity soccer team, will be attending North Dakota State University while Maddie Stoks, a defenseman on the team, will be playing for the University of Memphis. For both Stoks and Grazzini, soccer has been an instrumental part of their life and has created countless friendships and experiences that they hope to continue in college.

Stoks began playing soccer when she was four years old on a co-ed recreational league. From there, she began to play soccer more competitively. “I played U10 when I was 8 and wanted more of a competitive team. So, I moved to play for the Burnsville Futbol Soccer Club in 6th grade,” Stoks said.

In eighth grade, she tried out for the Shakopee high school team and made varsity. In ninth grade, Stoks transferred to BSM her freshman year and has been playing on the BSM varsity team for the last four years.

Grazzini also began playing soccer at a young age and has moved from team to team as she grew and developed more as a soccer player. “I started playing rec soccer at around age 4 or 5 probably. I think I started playing traveling soccer with CC United at U10. I played there until like U14 then I switched clubs to play for Tonka United and I stayed there for a few years and switched at U16 to club I am at now, Minneapolis United,” Grazzini said.

Choosing a college to play a Division One sport at can be a daunting task because such a large decision will influence the direction of your life for the next four years. Most student athletes rely on a strong support group of family and close friends to aid them in their decision making process, but they also appreciate the freedom to go where they feel is the best place for them. “I knew I wanted play soccer in college and my family was very supportive and helped with all the expenses and travel for my club team throughout the years,” Grazzini said.

She also enjoyed the culture and atmosphere of the team because they are driven to be successful as a unit and have very strong team chemistry. For Stoks, The University of Memphis appealed to her not only because of its strong soccer program, but also because of its renowned business school. “Memphis is a well-rounded school. It has a very successful business school, which is what I will be majoring in (sales and Marketing specifically),” Stoks said.

Similarly, Grazzini was also drawn to the team chemistry and their strong success. “The coaching staff is just really genuine and nice and I really like the goalie coach and her style. I had worked with her at camps so I had known her which was nice. NDSU is not too far from home which is also a plus. I just really enjoyed the environment and the team when I visited and knew it would be a good fit for me. The team does well in their league (the summit league), which also helped my decision because of their success,” Grazzini said.