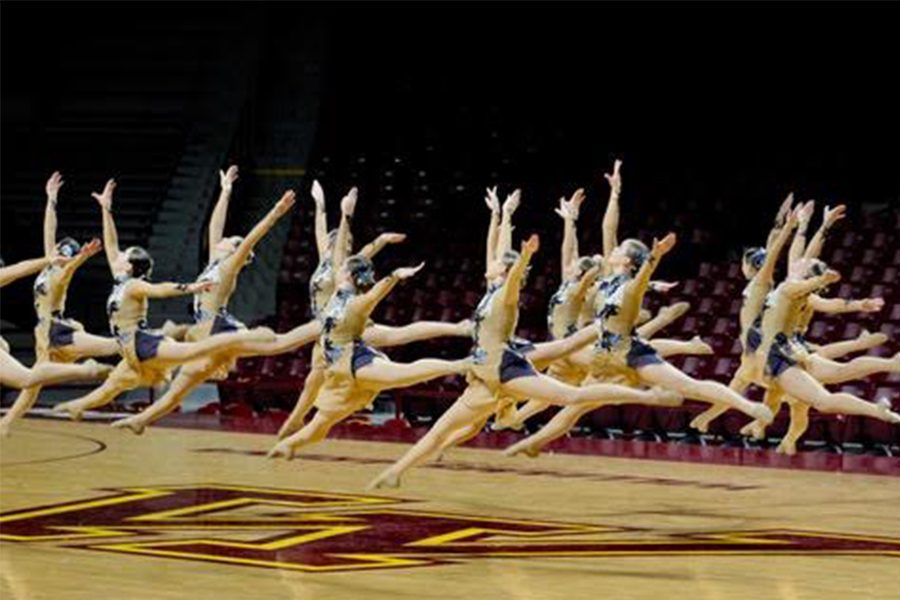 Knightettes leap during the dance at "Best of the Best".

To say the BSM dance team has owned its competition lately is to say the ending to the Vikings’ win over New Orleans was mildly entertaining.

The Knightettes have become accustomed to beating the competition, getting to the State tournament and coming home with hardware. A lot of hardware.

There are no imminent plans for an addition to the school’s trophy case, but an argument could be made. The Knightettes Jazz team has finished first or second in the State tournament every year since the 2007-08 season, winning titles in ’08, ’11, ’14, ’15 and ’17. “The hard work and passion the girls have for the sport are why they have been so successful,” head coach Sam Cameranesi said.

There are two categories of dance in the Minnesota State High School League, Jazz and Kick. BSM competes in both. While the Knightettes have been dominant in the Jazz category, the Kick team is coming off a successful season as well, as it finished sixth in last year’s State tournament. “Benilde has definitely made a mark on the Jazz category, but this is one of the most successful Kick teams we’ve seen in years,” Cameranesi said.

In the recent Metro West Conference championships held in Chanhassen, the Jazz team captured its first conference title since 2011 while the Kick team finished third. “The girls have a lot of natural ability for the sport so my assistant coaches and I just try to push them beyond what they can do,” Cameranesi said.

The routines the teams use during the season are a work in progress. Certain members of the team are designated to the “choreography committee”, which puts together the formations and choreography for the routines. From there, based on feedback from judges at competitions, changes are made based on a routine’s strengths and weaknesses. “By the end of the season, in our last competition, the routines look nothing like what we started the season with,” Cameranesi said.

The subtle changes the team has been making over the years are obviously working. They have a trophy case full of hardware for proof. The Knightettes are now trying to carry their momentum into the section meet at Big Lake High School on February 3.