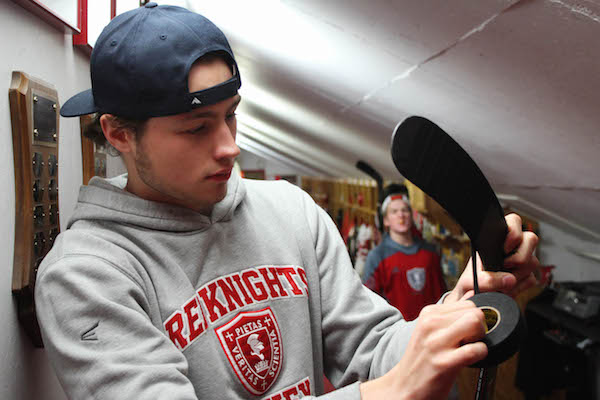 At BSM, many students participate in school-sponsored sports or activities. On varsity and junior varsity teams, game days usually come with individual superstition and sometimes even year-long team traditions. These superstitions can work for or against the team.

The BSM Knightettes have a long-running history of becoming State participants and champions in both their jazz and kick dances. At State last February, the varsity team took first place in jazz on the floor of the Target Center. Most people will credit their wins to their choreography and technique, but some of the hype around BSMDT could possibly be from their competition-day traditions that have been running within the team for years. “I think people just started doing them, and then it caught on to the whole team from there and the traditions never disappeared,” sophomore Alexis Basil said.

One of the team-wide traditions the varsity dance team has is putting on hand sanitizer right before they go on to preform. As weird as that sounds, it has worked really well for the girls for the past five years. The coaches put hand sanitizer on the girls’ hands moments before they go on stage. They do this before every meet, home and away, and everyone on the team participates in the tradition.

However, some other athletes have their individual traditions. Sydney Wilharm, a sophomore on the girls’ JV hockey team has her own independent gameday tradition. Before every game, Wilharm re-tapes her stick a certain way. She has been performing this ritual before all home and away games for the past three seasons. Her tradition came out of blue and was not planned at all. “I re-taped [my stick] before a game, and I played really well, and I’ve been doing it since then,” Wilharm said.

BSM boys’ varsity hockey team also have a variety of their own personal superstitions. Senior Assistant Captain Joe Collins has to listen to the same playlist before every game, and he has to make sure it’s the same way every day the team has a game. In addition to this, senior Assistant Captain Jerome Newhouse, has to be the first one in the locker room after the teams warm-up before the game actually begins.