Students weigh Soundcloud and Spotify against each other 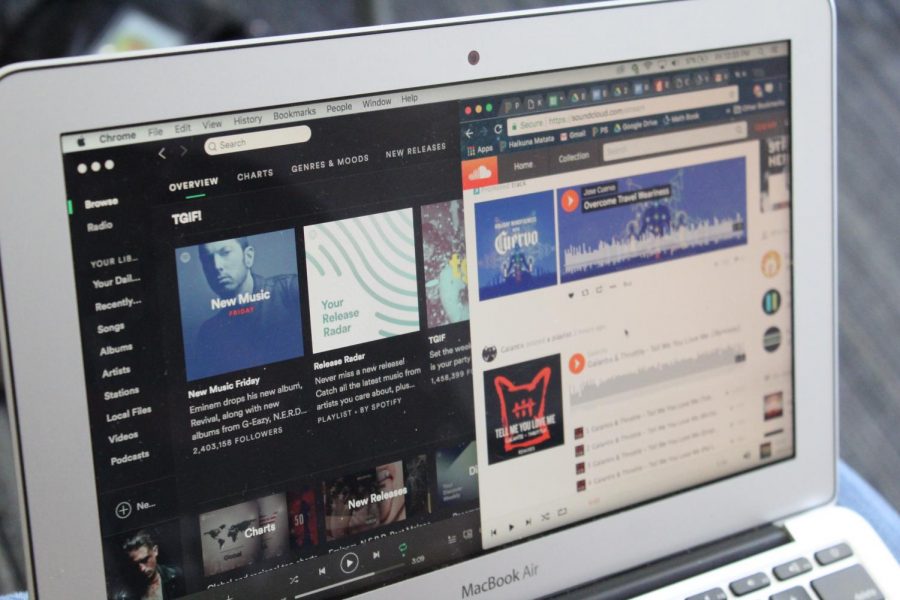 Many students have strong preferences in relation to their choice of streaming platform.

One of the most heated debates in the music world is between two major music platforms: Soundcloud and Spotify. Students at BSM use both, but which one has truly won over the student body?

Spotify’s ad-free program called Spotify Premium costs users $9.99 per month or $4.99 per month with the student discount for college students. This allows users to listen to music with no ads, play any track, use unlimited skips, and to listen offline.

Students at BSM tend to lean toward Spotify. Of 135 students that responded to a survey, 86.67% (117 students) of those prefer Spotify over Soundcloud. The majority of these students enjoy the ease of navigating Spotify. “Spotify is more user friendly. It’s easier to discover new music and find playlists to your taste,” junior Meagan Steck said.

Students who use Spotify enjoy the ease of making and finding playlists. They are able to find and put songs into mixes quickly and listen to those playlists whenever they want. “With Soundcloud there’s just a lot of remixes so it’s hard to find the original song, and it is easier to learn how to use Spotify and make playlists,” senior Ruby Strommen said.

Although there is more ease involved with Spotify, some students find the journey that goes along with finding music on Soundcloud well worth it. “When you’re willing to put in the time to develop your own musical pallette, good music starts flowing into your stream. It is an investment of time, you have to allow the app to cater to your taste,” senior Noah Shields said.

Soundcloud sets itself apart from other music platforms by giving its users the option of uploading their own tracks. Many artists get their start by just uploading some of their music onto Soundcloud. Some of these artists are able to becoming recognizable names, like rappers Lil Yachty, Lil Uzi Vert, and Lil Pump.

It is clear that the debate between Soundcloud and Spotify is alive and well, especially here at BSM. Listeners from both platforms have strong arguments as to why theirs is better: with more ease in finding music from Spotify, and underground names that can become popular from Soundcloud. “There are features to like about both, but it just depends on whether you like  mainstream music or underground artists,” Shields said.