Students and teachers participated in safety training to ensure preparedness in any situation. 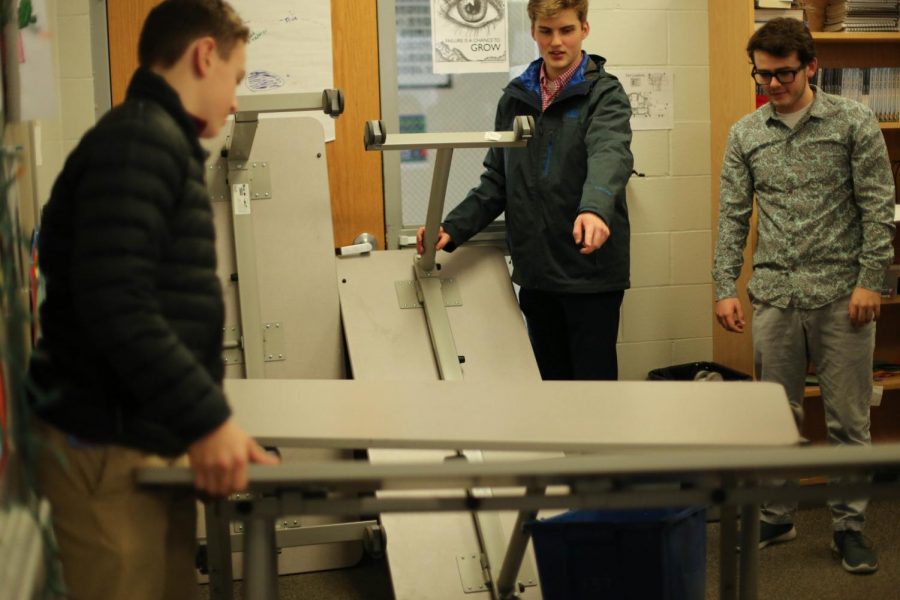 A.L.I.C.E. gives students options for how to react in serious situations, including barricading the doors.

From the shooting at Columbine High School in 1999 to the Sandy Hook Elementary School shooting in 2012, it has been made known that violence in schools is a very real and dangerous threat. While the chances of it happening at any individual school are low, no school is immune, so it is still important to be prepared and ready if the unimaginable situation ever does occur. Having safety drills and training for potentially dangerous situations can possibly save lives.

Benilde-St. Margaret’s is currently following a system of training through a program called A.L.I.C.E. As both teachers and students have learned, A.L.I.C.E. stands for Alert, Lockdown, Inform, Counter, and Evacuate. Rather than just lock and hide, it gives the people in a harmful situation options for how to act. “Most research out there now with schools and businesses is telling you that having one option, which is lockdown, is not safe. Even some of the colleges this has happened in where some kids locked down and some kids evacuated shows that anybody that was locking down and only stayed locked down has a higher rate of mortality. There’s a bunch of data; sadly, since Columbine, that schools and businesses that only do one option have a higher mortality rate. Most schools will be going to this model of options,” Assistant Principal and Dean Ms. Mary Andersen said.

On Wednesday, October 11, teachers at BSM went through active shooter training. The FBI defines an active shooter as “an individual actively engaged in killing or attempting to kill people in a populated area.” By knowing and reacting to a situation involving an active shooter, deaths can be greatly minimized. The way that teachers react is extremely important in a situation such as this because they are the ones taking control of the situation and leading their students to safety.

For teachers, training was very intense and realistic as they were trained with objects representing bullets. “We had it where it was more simulated where tennis balls were tossed at us or thrown at us to simulate bullets or somebody shooting, so it was more realistic because if you got hit with one of them the idea was that you would be an injured person, so it definitely was very intense, but I think a good learning experience to see the different options and how you’re supposed to barricade yourself to keep you and your students safe,” Spanish teacher Ms. Mary Murray said.

Although it was intense, many teachers believe that students, teachers, and staff would benefit from this training if the situation were to occur. “The concept is hard to get your head around because you’re having to make those decisions, and its a split second decision, but I think it’s going to lead to fewer injuries and fewer deaths. Hopefully we never have to deal with it. It’s tragic, the fact that we’re dealing with it in the first place,” Murray said.

The teachers learned of their options and different techniques to use. “We took the auxiliary cord that you hook up your projector to keep the door in because we had a door that swings outward. The door was swinging outward, so therefore it’s easier to open up, so we had to come up with a way to keep the door closed. We took the projector cord and wrapped it around one door and wrapped it around another door and made it tight so that you couldn’t open the door,” science teacher Jennifer Roushar said.

Administrators play a major role in training and in a real life situation as it is their job to inform the school and to continue to talk on the loudspeaker. “What the research also shows and the experiences have shown is the more you say out loud where the shooter is or where the intruder is, the more bugged he or she is and can’t concentrate on their task at hand,” Andersen said.

The teachers training was intense, but Andersen went through an even more intense training so she would be able to train the school to handle such a severe situation. “I was trained by the A.L.I.C.E. organization. So I went to a training that was even a little more intense than what they did. Where the guy did have an airsoft gun and we did get shot at while we did our training. It was a two-day training and the second day was all situations. I didn’t take that training so I could learn about A.L.I.C.E., I was being trained to be a trainer,” Andersen said.

While it’s important for teachers to know how to take control in an active shooter situation, it’s important for students to know what to do as well. On Friday, December 8, students at BSM experienced the first session of training for a potential intruder. Students practiced building a barricade with classroom furniture and then practiced evacuating the building. It was much different than the teachers training, as students had a much calmer experience. “A.L.I.C.E. is a national organization, and they give you levels of training based on the age group that you’re in. From pre-kindergarten all the way up to adults as businesses. They want the adults at the schools to be trained more intensely where there’s actually a person who’s dressed like an active shooter, and they’re not shooting you with anything, but they’re throwing tennis balls. It’s a little intense. We would never do that at this school [with students] to start with. I don’t know if we’ll get to that eventually or not. The teachers, just because of their intellectual maturity, are able to handle if you prepare them ahead of time,” Andersen said.

While teachers are more likely to handle that training, there is a possibility of it being too much for students especially because BSM has students from ages twelve to eighteen. “Ultimately, I want the kids to be able to get to the point where there’s a little bit of the adrenaline moving, but you can’t start there with students. We started there with teachers, but we can’t start there with students. People are at such different places with what scares them and what empowers them,” Andersen said.

There are even some differences between high school and junior high training. “The high school kids are in this independent awareness where they’re going to actually make decisions. So even though we’ll all train together, the junior high teachers know their age group better, and they will probably be the major decision makers down the road. We might even have a high school student who somewhere down the road is in study hall, and there is a substitute teacher and that teacher hasn’t been trained but the student has been trained. I would expect the student to be able to lead the situation. That’s what we want from our students eventually because in this building there are many times where our kids are not with a trained adult in A.L.I.C.E.,” Andersen said.

Although students have only gone through one session of training, students are beginning to see things that are beneficial and also things that may be flawed. “It was definitely very informative. A.L.I.C.E. is probably going to be a very good way to learn how to deal with specific situations. It’s just kind of overwhelming because there’s so many people. It was hard to hear the P.A. and shoes were really squeaky. They just kind of threw a lot of information at us. ‘This could happen, but we’re not going to do it right now.’ The way that you react to a situation right now might not be the same as your reaction under pressure,” junior Alexa Field said.

Students are also aware that an active shooter is extremely terrifying, and therefore, actions under that situation may be different than what was done in training. “You can’t prepare for something so traumatic. That’s not realistic. Being in that kind of a situation, there’s a lot to think about, it’s overwhelming and you have so many ‘what-if’ questions. It kind of makes it hard to comprehend now. It’s good to take the precautions,” junior Cheyanne Carter said.

Although it may be tough to think about it, many students can agree that the A.L.I.C.E. training was better than the one option system BSM previously had. “It’s a much better system than the ‘code-red,’ ‘code-yellow,’ thing; it allowed more situation preparation instead of just blatant direction,” junior Jeanna Edlund said.

While situations such as an active shooter can be very tough to think about and train for, it is important that the school thinks about it now rather than wait if the situation ever does arise and not know what to do. “Before things like A.L.I.C.E. were invented, it was all truly ‘hide from it, it’s too scary, let the police deal with it,’ but the police often aren’t able to get to a place until three, four, or five minutes after the intruder gets there and most of these things are done in three, four, and five minutes. So you’ve go to have something in place that you can’t just rely on the police to come and help you. You have to be able to take your fate into your hands sometimes,” Andersen said.