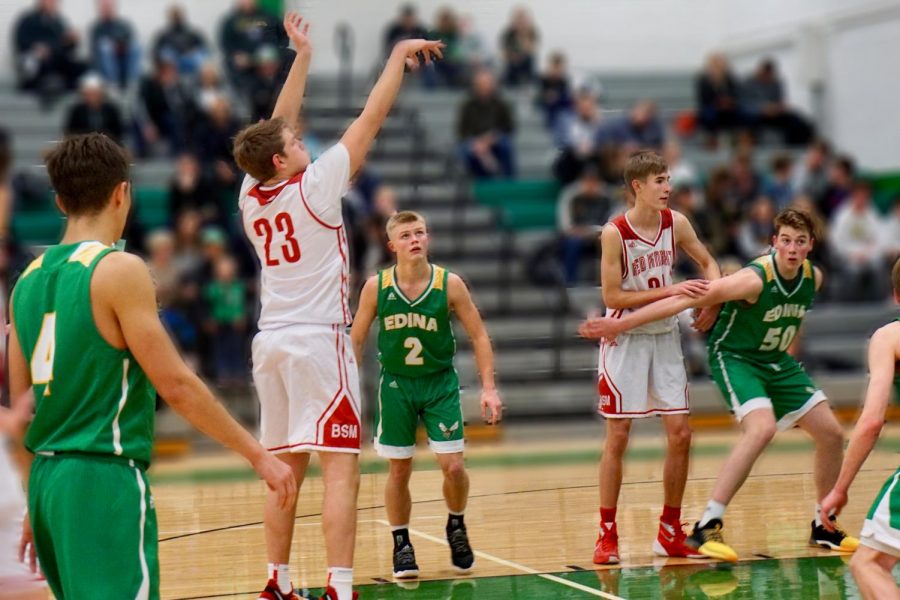 For the first time since Jordan Taylor, (‘08)—who was a varsity basketball player at BSM and the University of Wisconsin-Madison, and is currently a professional player in Europe—a member of the BSM boys’ varsity basketball team will be wearing the number 23. Joe Dunn, the last of three Dunn brothers to come through the BSM basketball program, will rep the highly sought after number.

Dunn is grateful for the opportunity to wear this jersey. “I’m very thankful to be receiving the honor of wearing number 23 this year, and it means the world to me that I was chosen for this incredible honor,” Dunn said.

In the past two regular seasons, Joe Dunn has compiled 378 points for the Red Knights. This makes him the team’s biggest returning point producer. Dunn scores the bulk of his points around the basket and has a very reliable mid-range shot.

O the court, Dunn works extremely hard in the classroom and is a member of NHS. The ability to balance both school and sports, while maintaining a high level of success, factored into Dunn receiving the coveted number 23. Along with school and sports, Dunn still spends time to give back to his community. He’s currently an 8th grade basketball coach at his former elementary school, Our Lady Of Grace, and he estimates that he volunteers nearly 70 hours during the winter to his community.

Dunn is no stranger to basketball. He has been playing the game ever since he could remember; he’s won three state titles in the A division of the Minnesota Youth Basketball Association with Edina, plays AAU basketball for the team D1 Minnesota, and has played varsity basketball since freshman year. “I have grown and matured as a player throughout my BSM career in a lot of ways, but I think one of the biggest is the speed I play the game at, and the speed I process the game at. I remember when I first started to get a lot of minutes on varsity as a freshman, the game seemed so fast, and I struggled to keep up; I was trying to move so fast. However, as the years have gone on, the game has slowed down for me a lot,” Dunn said.

Dunn’s older brothers, BJ and Will, were also cornerstones to the basketball program’s success in the past. “It’s great to see my brother’s hard work pay off; if anyone deserves the number 23, it’s Joe, due to the tremendous work ethic he carries in the offseason and the commitment level he maintains during the gruelling winter schedule,” Will said.

In the offseason, most athletes either spend time to unwind or relax due to the strain a varsity sport can put on their body and mind. However, Dunn ramps up his level of practice and production to fine tune his game. “I have a lot of extra training besides BSM practice. I work out four times a week with a trainer at Lifetime Fitness; I’ve played spring and summer basketball every year since 6th grade. Basketball is a year-round sport for me that takes up a lot of time. I spent a lot of time training for basketball with various trainers over my time playing the game,” Dunn said.

Dunn has many specific professional players he has patterned his game around. “I would say a few of the role models I base [my] game o of are Tim Duncan, Carmelo Anthony, and Marc Gasol. I think my game takes aspects from each one of those guys,” Dunn said.

With the success on the basketball court, Dunn has seen interest from many different college programs. Dunn has been talking to St. Thomas, where his brother Will won a National Championship in 2016. “I haven’t fully decided where I see myself playing in the future, but if I were to continue playing I think I would play at the University of St. Thomas next year. My brother played there, and I have a good relationship with the school and coaching staff there,” Dunn said.

Between all his hard work and a strong bond with the team, Dunn is hoping the team has great success this year. “I have very high expectations for this year’s season. I think we are poised to make a run and surprise some teams. We have nine seniors returning, as well as some fresh blood eager to make a statement. We have a very well balanced team that has a lot of experience between us all. We are ready to make a significant run. We have goals to win Conference and eventually make it to State. Once in the State Tournament, anything can happen, and we’ll try to make a run, ” Dunn said.