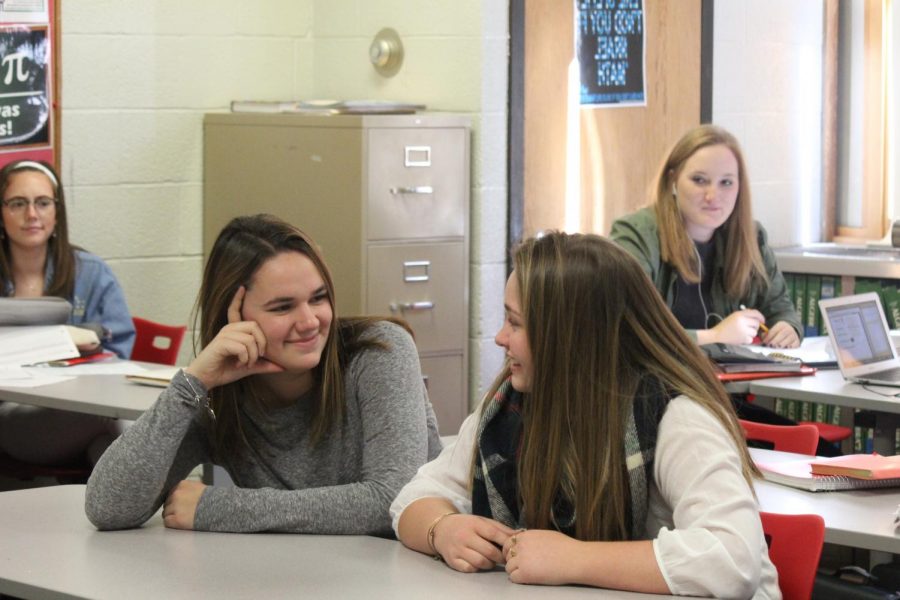 Pohlen and Nevells try to sit in different seats in their classes.

Blending in. While many teenagers strive to find out who they are during their high school years and often branch out into new territories whether in sports, activities, or even the way they dress and express themselves, I have always been one to stick to what I know. Since the young age of 10 when I started playing on a new soccer team and absolutely dreaded the idea of being in a new situation, I have had to work extra hard in order to settle myself in new situations.

When Kylie and I originally decided to do onesies for a week to go out of our comfort zones, I was pumped. I couldn’t imagine anything more fun than basically wearing pajamas for a whole week of school. It was going to be awesome.

I should’ve known myself better.

In the middle of the first day that this assignment was supposed to begin, we decided that sitting in different seats in class was the most adequate option for us to do. I changed seats in a class a total of two times. One of these times was moving from the seat I usually sit in, to the seat right next to my usual seat. My effort was not very impressive. It wasn’t even a big enough change for anyone to notice.

As it turns out, I am still very poor at leaving my comfort “bubble.” I couldn’t even accomplish the simple task of sitting in a different seat in a class for five days. As I reflect on this sad attempt of trying something new, I am thoroughly embarrassed.

When our editors proposed a project to go outside of our comfort zones, Olivia Pohlen and I were thrilled. We jumped at the opportunity and thought about wearing onesies for a straight week. The idea was out of our comfort zone, so much so that we backed out. We rationalized it with the fact that Grandparent’s Day would be a conflict for Olivia and that the cross country dress up day would be a conflict for me.

After throwing out multiple ideas, we decided to sit in seats that were different from our usual spots; if I didn’t have an assigned seat, I would sit in a seat that I normally wouldn’t sit in. We were already a day behind, so we were going to try to change seats in as many classes as possible. I forgot in almost every single class. I moved seats a total of two times, and one time was on accident. Basically, I gave up in the middle of the week.

High school is hectic. While I failed this project, I believe it reminded me that sometimes we can’t do it all. For me just changing anything about my routine was out of my comfort zone. I am constantly prioritizing, and changing my priorities was uncomfortable. It was inconvenient.

This project made me realize that I am stuck in my routine, and it is good to wake up for a bit and look at another perspective.