The popular show House of Cards and Madam Secretary showcase the characters through clothing choices. 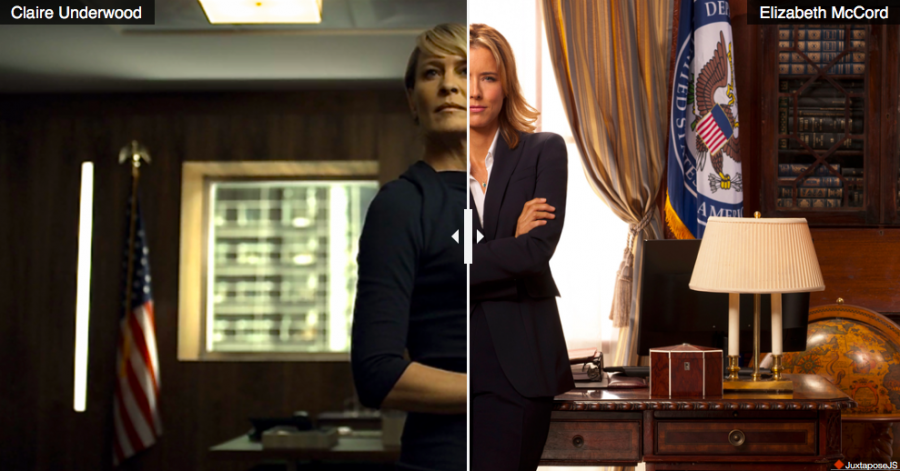 From Lady Gaga to Beyoncé to Madonna, clothing is often used as a way to express one’s self without saying anything. On the shows House of Cards and Madam Secretary, clothing is used to display the status and power of the leading women on the shows.

On Netflix original House of Cards, Claire Underwood (played by Robin Wright) is the conniving, intense, and determined wife of president Frank Underwood. Claire Underwood starts off as a supporting character, and by the end of Season 5, she has grown into a force to be reckoned with.

CBS drama Madam Secretary is the complete opposite of House of Cards. Aside from the political background, Secretary of State Elizabeth McCord (played by Téa Leoni) is determined, shrewd, and caring. In the show, she balances home life with government and displays a strong sense of leadership.

With the characters being nearly opposites of each other, their styles can be identified as being opposites as well. Claire Underwood wears more neutrals and has sharper lines; she has a look that could be described as being cut-throat. Elizabeth McCord wears a variety of colors, and her style has a professional look that avoids sharp lines and precise folds. What makes them similar is they have styles that show they are willing to take charge and are feminine yet professional.

The costume designer for Madam Secretary, Amy Roth wanted to make sure that McCord would not be a style icon. The outfits for the fictional Secretary of State represent a new reality; jackets are not necessary and sleeves can be rolled up. The appearance is a modern and sophisticated approach to Washington style.

For House of Cards, Underwood’s style evolves with the character. Starting as the head of a charitable organization, she is seen in pencil skirts and button up shirts. Costume designer Kemal Harris has every piece tailored exactly to actress Robin Wright’s frame. This gives a precise look to Underwood’s wardrobe. For her outfits, colors are often used as a way to show the events Underwood is a part of,and the styles of clothes are used as a way to manipulate and distract those around her.

House of Cards viewers can find the perfectly tailored pieces of Underwood’s to be strong, commanding, and fashionable. For Underwood, her meticulous style matches her deliberate thought; clothes are used to Underwood’s advantage. When Underwood needs to appear more approachable, she wears shorter sleeves, more fluid fabrics, and softer colors. Underwood’s ability to play on emotions through her clothes gives viewers a chance to see when her wardrobe commands power, sympathy, ambition, and her true rigid personality.

For viewers who watch Madam Secretary, the clothes Leoni wears provide a strong impression. Her clothes look intentional and pulled together; they are able to reflect her confidence. Her common vest over a blouse gives her the appearance of a ready-to-work professional with a focused style. Leoni’s character obtains a much more classic business look.

“[McCord] is a woman who advises the president on foreign affairs. Her wardrobe should reflect her ability to exercise good judgment in all matters,” said Roth in an interview with the Hollywood Reporter. Roth uses femininity to give McCord power. She gives McCord a variation of outfits from pencil skirts to dress pants and a blouse.

One thing that the roles share is the actresses gave their input. Leoni chose a pair of McCord’s earrings as a symbol for peace, and she chose a necklace for her and on-screen husband Tim Daly to wear as a symbol of their on-screen marriage. For Wright, she brought Harris in at the start of season three to design for Underwood. With Wright directing many episodes, this allows for her to accentuate the wardrobe.

With such unique styles, their wardrobes are able to speak for themselves. The clothes McCord and Underwood wear give viewers a new perspective of who they are as characters.