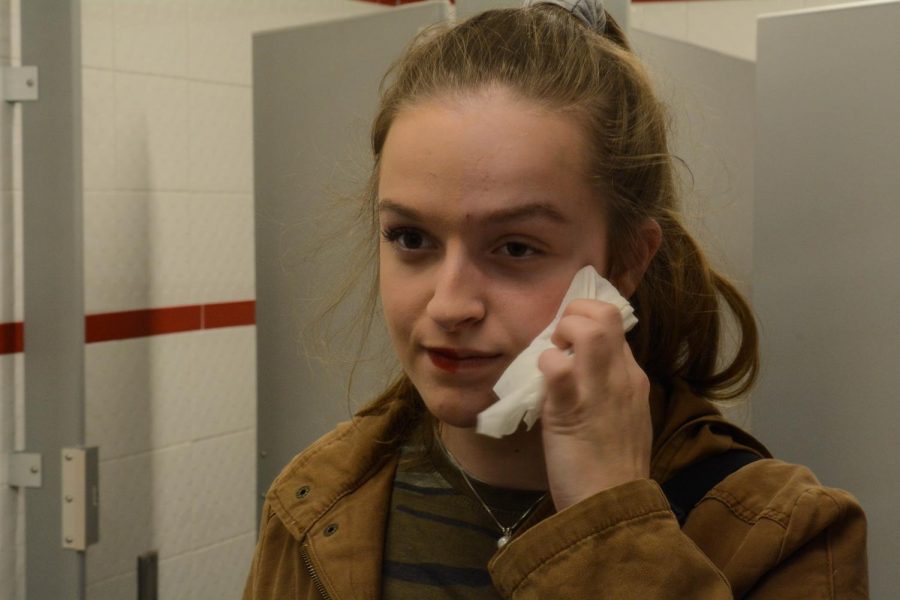 Paquette wears no makeup for a whole week of school.

The hardest thing for me during this assignment was to stay positive and be myself. For the past six years, my security blanket has been my 30-minute morning routine of mascara, concealer, and foundation, and without it, I found myself looking at the floor, avoiding eye contact, and feeling completely naked. This week was a moment I had been fearing for almost half of my life, a week in which I would have no protection from the judgmental hallways of high school.

From an early age, I learned that as a woman in modern society, the definition of beauty wasn’t your physical character, but rather what you could do to cover it up. I had adapted to that, becoming almost dependent on my products. While makeup boosted my self-esteem, it trapped me to never be able to leave my house without it. As I tried to end my dependency, the hardest day was most definitely the first. Even though I was taking out a half-an-hour of makeup from my routine, I still left the house late. Most of my morning was well spent standing in front of the mirror, not able to leave the small room that consumed all of my fears and doubts.

On that first day, my thought process was all over the place, and it became noticeable to my friends. “She was on edge and nervous all day, you could see her eyes flickering from one person to the next, wondering if they had noticed,” senior Jack Gables said. As the day had gone by though, I had seemed to forget about it. Until that is, when I went to the bathroom and was quickly reminded how different I looked.

While my week was full of negatives, whenever I found a positive it surely brightened my day. After a few days, my mind began to forget the bareness of my face. The days became easier, and I was able to sleep in later and have no issue leaving on time anymore. Before, it had been a burden to perfect my makeup, but now it was just the ease of slipping out of my bed and walking out the door within 20 minutes.

Yet, I still dealt with the worries and fear of what people thought of me, which all flashed back to one memory from sixth grade, which was the last time I had ever gone to school bare, when a kid laughed at how tired I looked. Yet this week, no matter how tired I looked, or how insecure I got, my face stayed bare. This week wasn’t just something for the newspaper, I did this for myself, and I dare any person out there who is insecure like I am to do the same. I dare you to go bare for a week, show the world who you really are, human.