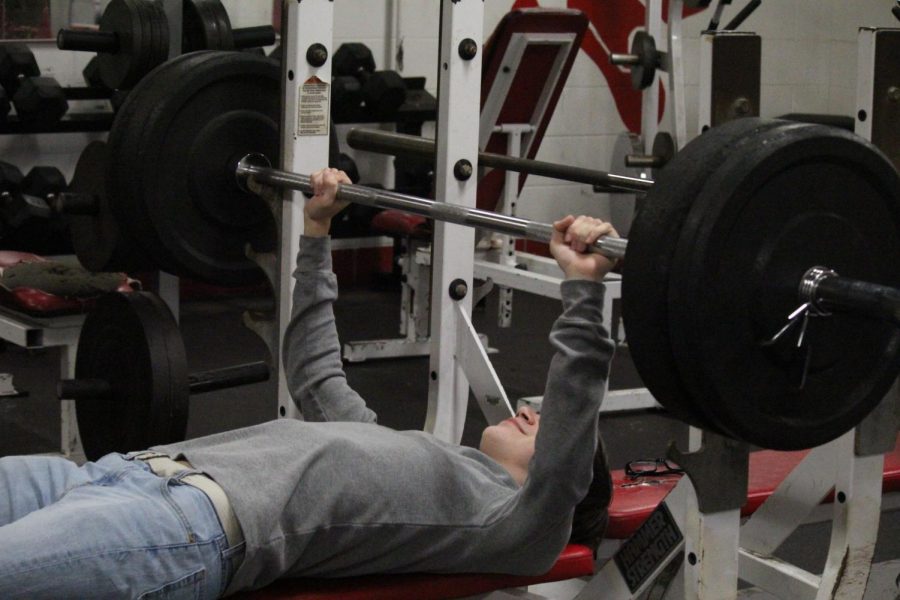 Plouff goes to the weight room and tries to work out.

For the past four years at BSM, I have never participated in a sport and, as a result, I have had no motivation to workout. As someone who has a high metabolism and can eat whatever I want without gaining weight, the thought of working out rarely crosses my mind; I’d rather sit on my couch, watch endless reruns of Friends, and eat a bag of chips than run on my rusty old treadmill that looks like it was made in the 60’s. When tempted with the challenge to do something outside of my comfort zone for one week, I hesitantly agreed to work out everyday.

I began my week by running on the treadmill for 90 minutes. As I was about to begin, it dawned on me that I had not done any physical activity since the spring musical, and that I should probably run at a slow speed; however, I brushed those thoughts aside, thinking I would be fine going super fast. That was a big mistake. After my 90 minutes were over, my face was a bright red tomato, and I don’t think I’ve sweat that much in my entire life.

As the week went on, I proceeded to do a variety of different workouts that lasted for at least one hour, such as walk two laps around Lake Calhoun, bike on a stationary bike, and few other methods. However, one day after play practice, fellow KE compatriot Will Krane took me to the YMCA, which I had not been to for about five years now. I decided to let him choose what we would do, thinking he wouldn’t choose to do anything difficult. Again, that was another mistake. He ended up choosing to go to the weight room and, first of all, I had no idea how many different machines there were in the weight room; I probably ended up trying about 15 different types of machines, none of which I remember the names. As I did all the workouts, I realized that, while they were difficult, I also didn’t find them to be the slightest bit entertaining. Now, obviously for some people, going to the gym might be fun, but personally, I got bored doing a workout after a minute. After about an hour, we called it a day, and I probably won’t return to the YMCA for another five years.

On the last day, I decided to end my week of workouts the same way I started it: by running on the treadmill for 90 minutes. This time around, I was still tired by the end of it but I didn’t feel as strained as I did the first time; I was glad to see that I ended up making some progress over the week. To celebrate, I chugged down two cans of Mountain Dew….which effectively made the entire workout pointless…..oh well.

Overall, even though my week was somewhat miserable, there were some benefits to working out; particularly, I noticed that my stress levels went down, and I felt a lot more relaxed. Working out is also a great way to stay fit, and I’ll probably end up exercising more often from now on. However, knowing myself, doing it everyday wouldn’t give me much pleasure, so I’ll just aim to workout one or two times a week. Now if you’ll excuse me, my couch is calling.