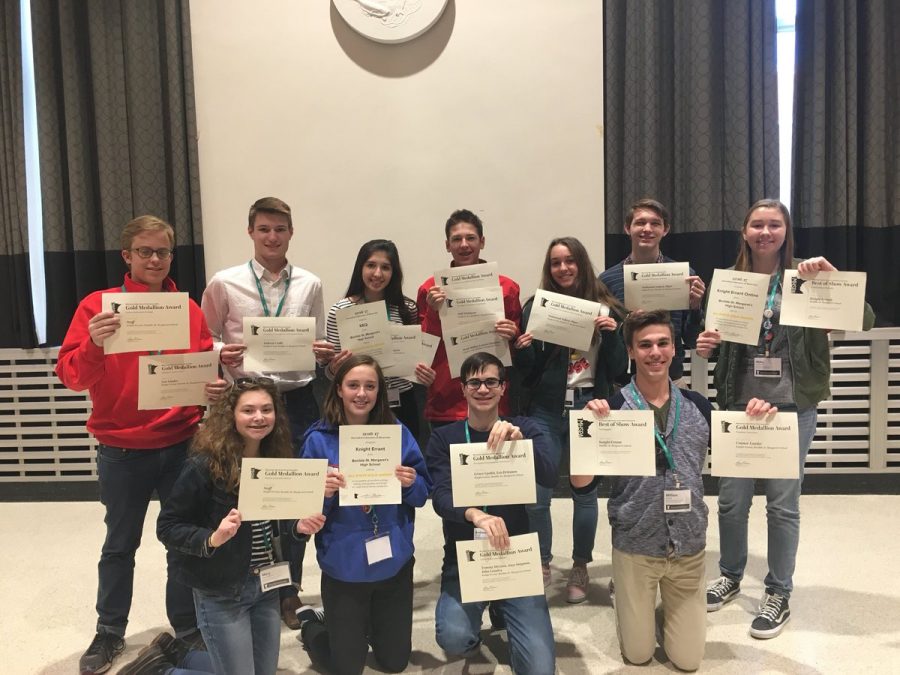 The Knight Errant is proud to receive recognition for their work.

For students interested in journalism, the Knight Errant provides a real world experience at a nationally renowned publication. Returning from the 2017 Minnesota State Journalism Convention at the University of Minnesota, the Knight Errant brought home 24 national and statewide awards. Between collaborative works and individual pieces students were able to receive credit from numerous categories.

Having multiple winners justifies why students are motivated to create an exceptional  publication, and advisors couldn’t be happier. “It gives the publication national recognition and pushes writers to produce work with high standards,” KE Advisor Ms. Kari Koshiol said.

Juniors Brad Shibley and Lauren Chevalier received 2nd place for their video of the Knightettes and alum Nathanael Ashton-Piper received two awards for KE stories. The staff as a whole brought home a 1st place for the MHSPA Gold Medallion Website General Excellence. “It was nice knowing that a video I made for school was recognized on a broader level,” Chevalier said.

When Ashton-Piper couldn’t claim his CSPA Gold Circle Certificate of Merit from his senior year, students congratulated him over text. Being excited to see old staff and students, Ashton-Piper (who now attends the University of Minnesota) met the participants after to congratulate and accept his award.

The Knight Errant staff was excited to find out they’ll also be expecting a gold or silver placement for the Columbia Scholastic Press Association’s 2017 Crown Award. The publication won’t receive their title until March, but editors are excited to see another plaque hung in room 153.

With awards pouring in, advisors have high hopes for the publication. In the future, writers will be expected to keep high standards and better themselves as creators. While the staff doesn’t focus on creating award winning work, they are proud their work has been recognized. “Obviously it’s an honor to be recognized by this award among with such impressive peers, however, none of us are focused on winning awards as we work. We do it because we are passionate,” Editor-in-Chief Abby Letscher said.