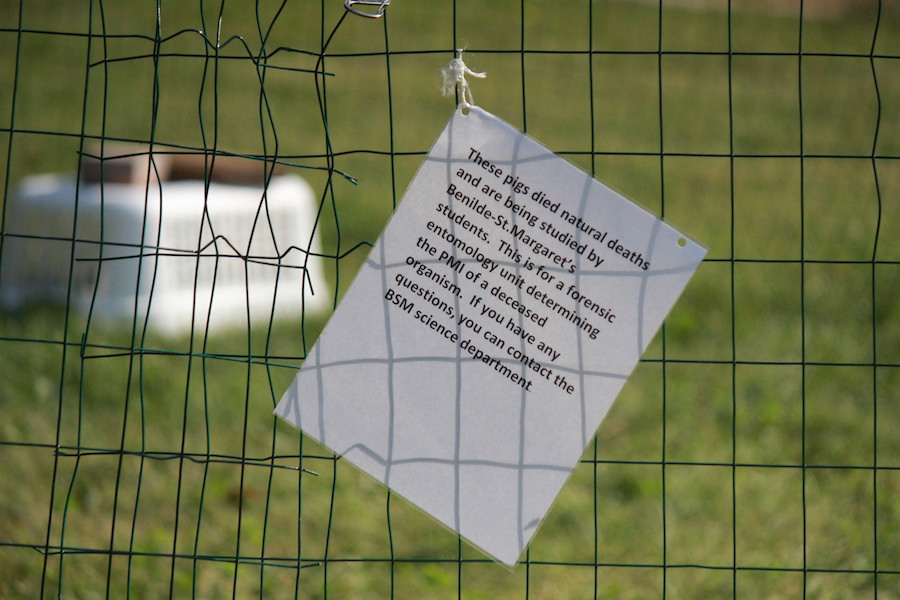 A sign was posted to help any confusion or fear surrounding the pigs.

In order to teach his Forensic Science students about forensic entomology, Mr. Bob Lyons puts out the bodies of fetal pigs and allows them to begin decaying. However, on Wednesday, September 6, a neighbor of BSM saw these remains and contacted the police. On Thursday, September 7, the case was officially closed.

Lyons fenced off an area behind the track––towards the end of BSM property––set out the pigs, and covered them with laundry baskets to avoid animals taking the remains. “My first reaction [to the police report] was, ‘Oh no what did they do with my pigs, did they cut our fencing?’ I [knew] that we could explain what’s going on, but…I was worried the ‘crime scene’ was contaminated,” Lyons said.

The Knight Errant received a copy of a post on the website Nextdoor, a forum website where neighbors can share information with everyone in their neighborhood, from the people who called the police. The post was private, so none of the information about it will be shared. However, in an attempt to calm some of the concerns in the post, it is important to note that these pigs are not poisonous or dangerous. They died of natural causes and will remain fenced in on BSM property.

The pigs are part of a Forensic Science unit to give students first hand experience with techniques used in crime scene analysis. “We are doing a forensic entomology unit where we use blowflies to determine the post mortem interval, time of death, of a corpse. We are using insect larvae as they decompose the dead organism to help us determine when the body was put there,” Lyons said.

While experiments such as this forensic entomology one have caused confusion, they are also an integral part of the class. Oftentimes, the students collect and analyze evidence in similar ways as crime scene investigators would in order to determine where or from whom the evidence came. “Being able to witness it and see it first hand will allow them to understand it much better,” Lyons said.

This was not the first time the Forensic Science class caused a misunderstanding. “This is the first time the police have been called, although security was called a few years back when a mannequin in the courtyard was misconstrued as a dead body,” Lyons said.

However, Lyons has no plans to limit the number of experiments the Forensic Science class does, as that would change the nature of the class. “I think more than anything [Forensic Science is] not textbook driven or lecture driven it’s experiential and fun,” Lyons said.