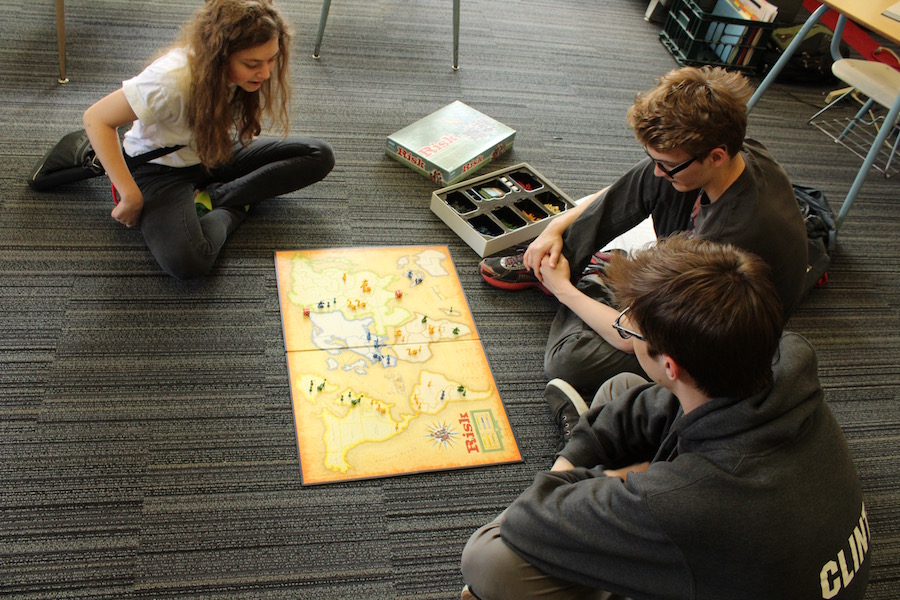 The Tabletop club meets every Tuesday after school in room 153 to play various board games such as "Risk."

BSM works to accommodate every person’s interest through a variety of extracurricular activities. Even though there are already a number of things to do at BSM, students are still encouraged to start clubs if there isn’t one that matches their interests. Sophomore Mary Youngblut has recently created a new after-school activity in which students can play all kinds of card and board games after school.

Youngblut calls her new activity the Tabletop Club. “We’re going to play card games, board games, or any game that you play on a table and also RPG games, which are role-playing games, like Dungeons and Dragons. It’s just a place for students to come after school if they have any time before activities or they just want to relax and play board games with their friends,” Youngblut said.

Youngblut has envisioned starting a club for board games at BSM since freshman year, but for a long time, she was too nervous to establish it. “I’ve always loved board games and card games. My oldest brother Jack became the publicity officer for his tabletop club in college, and he immediately told me to start one at BSM, and I thought that sounded awesome. [I started thinking about it] freshman year [but since] I didn’t know a lot of people at that time, and I didn’t know how to start a club I didn’t. Finally, this year I decided that I wanted to try and create a club. After talking to Mr. Pettinger, it was a pretty simple process; just talking to him, getting an adviser, and then making posters,” Youngblut said.

Tabletop Club will be a regular activity after school, but commitment won’t be a huge issue as the format will be very relaxed. “It’s not a club you have to sign up for, you aren’t on the email list, and you don’t get a t-shirt. If you don’t make it to every single meeting, it’s fine. You can come when you want. If you don’t feel like you doing your homework, and are here late, you can come and play board games, rather than just sitting in the library doing nothing,” Youngblut said.

It may be relaxed and lenient, but Tabletop Club will be a great time for everyone after the long school day. The new Tabletop Club meets every Tuesday after school.