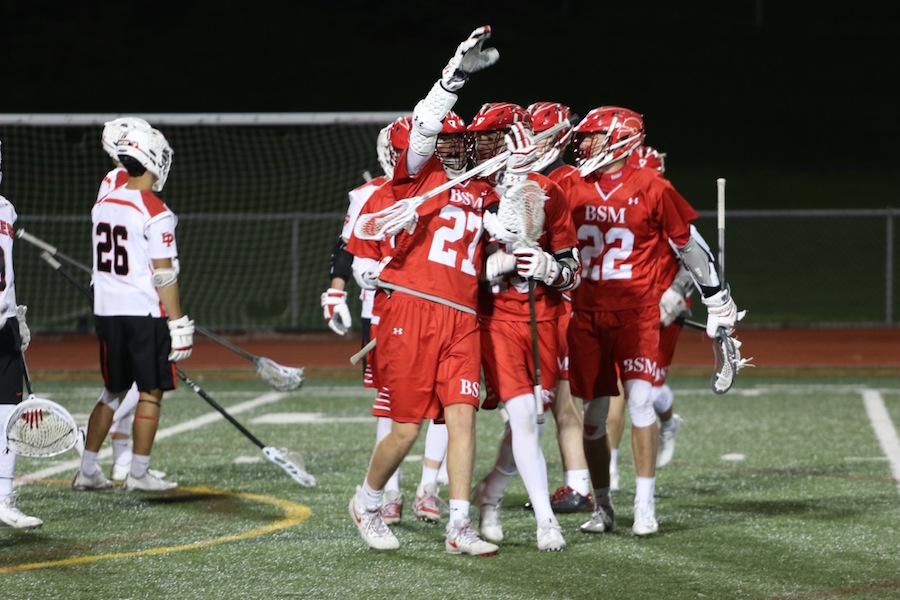 BSM boys' lacrosse is undefeated and has beaten many quality teams.

Definition: To bring back the tradition and success of the former Benilde-St.Margaret’s lacrosse teams.

Sentence: The 2017 Red Knights team looks to Restore The Order this lacrosse season.

The year was 2011, and summer was upon us. The calendar marked June 9th, but this was not an average summer day. That day, The Benilde-St. Margaret’s Red Knights and Eden Prairie Eagles collided for the grand prize in boys lacrosse: the State Championship. Led by the likes of Will Hoseley and Christian Horn, the Red Knights claimed their second consecutive State Championship. The program stood above all. A dynasty appeared to be in store with countless state titles on the way. However, for the last six years, the Red Knights seasons have been filled with memories of heartbreak and sorrow, with no titles to show for their hard work. But as the spring sun has shined upon us, a shimmer of hope has radiated throughout the Benilde-St. Margaret’s campus. The lacrosse team stands undefeated, and indeed has their minds set on Restoring The Order.

Prior to the season’s beginning, the team had vengeance on their minds. After a tragic 7-5 loss to the rivaled Blake Bears, the Red Knights immediately seeked revenge.  “I truly think that loss has helped us; we worked very hard this off-season during the summer, fall, and winter, and I think we’ve learned to trust each other and the coaching plan more this season. Not a day went by when I didn’t think about that game,” senior captain Carston Swenson said. The offseason workouts and lifting prepared the Red Knights for potentially a great season.

Through three games there appeared to be potential. The Red Knights stood 3-0 while outscoring their opponents 53-9. Benilde seemed to be playing their best brand of lacrosse as they prepared for an upcoming daunting task: a road game against Number 1 ranked Eden Prairie.

Prior to the game, The Red Knights felt chills of nerves much like the chills that passed through Aerie Stadium that night. “We were extremely nervous. We were about to play the best team in the state, with a huge opportunity at hand,” senior captain Ben Scherer said.  As the game commenced the teams became locked in a cagey battle. Both defenses refused to bend, as the game was deadlocked at 4-4 by regulation’s end. After two overtimes no victor had emerged. It appeared as if this game would last until sunrise, but finally, freshman Jack VanOverbeke scored his seventh goal of the season, winning the game for Benilde, and sealing the upset.

When asked about the win Scherer could only smile. “After we won, our whole team was ecstatic. It was a huge milestone to beat the top-ranked team in the state, especially after having fallen short to EP for the past three years. We (the offense) owe it to the defense for standing on their heads for the seven quarters that we played against a very talented team. Without them (the defense), the outcome of the game would have been much different”.

As we flip to present times, not much has changed. The lacrosse team now stands unblemished at a perfect 7-0 record with the wins over Mahtomedi and Blake. They now claim the State’s number 3 ranking, and are prime contenders to take home the coveted State Championship. Even though the team is off to a great start, Scherer is not satisfied. “Although our team is off to a great 7-0 start, we have to act like we have been there before. As of now, we are one of very few teams with an undefeated record, making us one of the most wanted teams to beat in Minnesota. We have to bring our A-game every day and take every game one at a time. We have some very tough competition coming in the next few weeks,” Scherer said.

The tough competition includes a massive conference game against Chanhassen this Tuesday night. Regardless of the result on Tuesday the Red Knights proved that this year’s team has the ability to be extremely successful.