After three consecutive days of practicing and scrimmaging, the boys' lacrosse team is closer than ever. 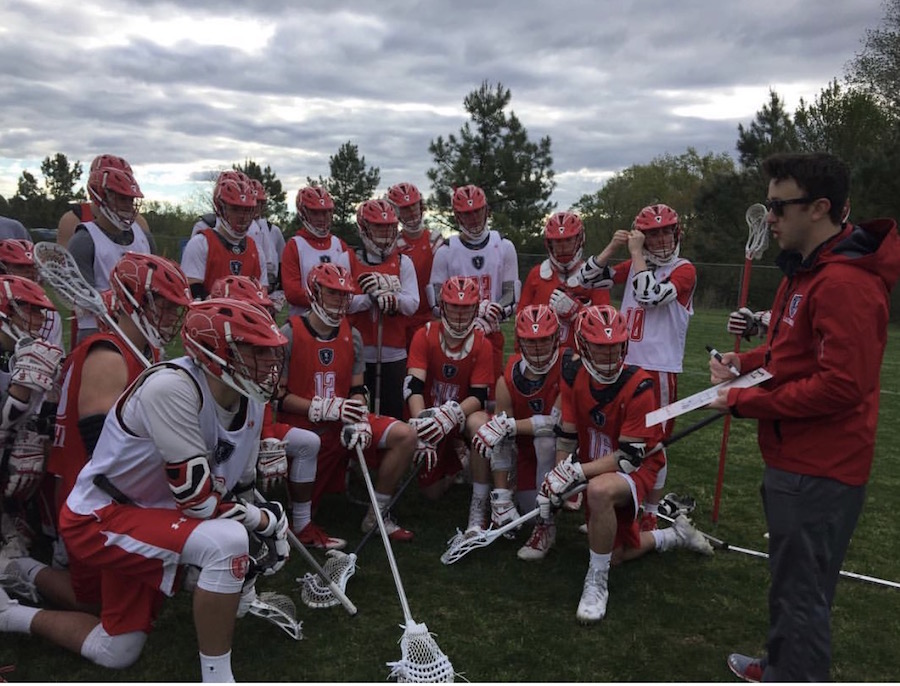 BSM lacrosse coach talks to BSM team to give guidance and share his insight.

Every spring season, the BSM boys’ lacrosse team takes a trip together the first week of the season to scrimmage other teams and bond as a team. This year they chose to travel to North Carolina. While on the trip, the team practiced, visited college campuses, watched a college lacrosse game, and had their own scrimmage with a local high school team. The purpose of the trip is to start the season off right; it’s important to develop and grow as a team as they head into their upcoming season.

Over the course of three days, the team had eight practices, so they spent the majority of their time learning to play together. With so many new players brought up to the varsity level, there was a great emphasis on introducing new players to the varsity team dynamic. A weekend full of practices is very beneficial to the new team; they used this first weekend together as a team to get ahead of the other teams who don’t have the opportunity to travel and work on their skills together. “We practice a lot on the trip which is a good way to install our systems early on in the season while we are bonding as a team both on and off the field,” senior captain Carston Swenson said.

A huge part of the trip is the team bonding. Not only do they practice a lot, but they had a lot of down time to hang out with one another. The team spent one of their days in North Carolina on the Duke University campus touring the lacrosse facilities and watching a Duke Men’s lacrosse game against the University of Notre Dame. For many of the players, this is a highlight of the trip. It allows for the team to watch lacrosse at an even higher level and bond as a team while doing it. “I enjoyed visiting the Duke facilities, listening to the Duke head coach talk, and watching the Notre Dame vs. Duke lacrosse game,” senior captain Ben scherer said.

Another major part of the trip is the big scrimmage against a local high school. This year the team scrimmaged Cary Academy––a smaller local private school––where they played with the team in a practice, and competed against them in a scrimmage. “We played at Cary Academy which has a lot of different facilities for us to use. Also it’s just a different location which makes it cool because most teams stay around here for their team trips,” Swenson said.

This trip is something that the boys’ lacrosse team looks forward to every year. Both the team bonding and consistent practicing allows them to grow closer to each other within the first week of the season. “I would say both the team bonding and all the practices that we had while we were there were beneficial. It is important to become familiar with the team, and the kids that you are surrounded by for the rest of the season. It gave us a good jump start on other teams that we play in the upcoming season,” Scherer said

As far as team goals go for the rest of the season, the team hopes to make it to the state tournament this year and advance past Blake in the section finals. “I’m looking forward to leading my team to success and having a great season,” Scherer said.

The team is off to a great start, winning all of their games so far.