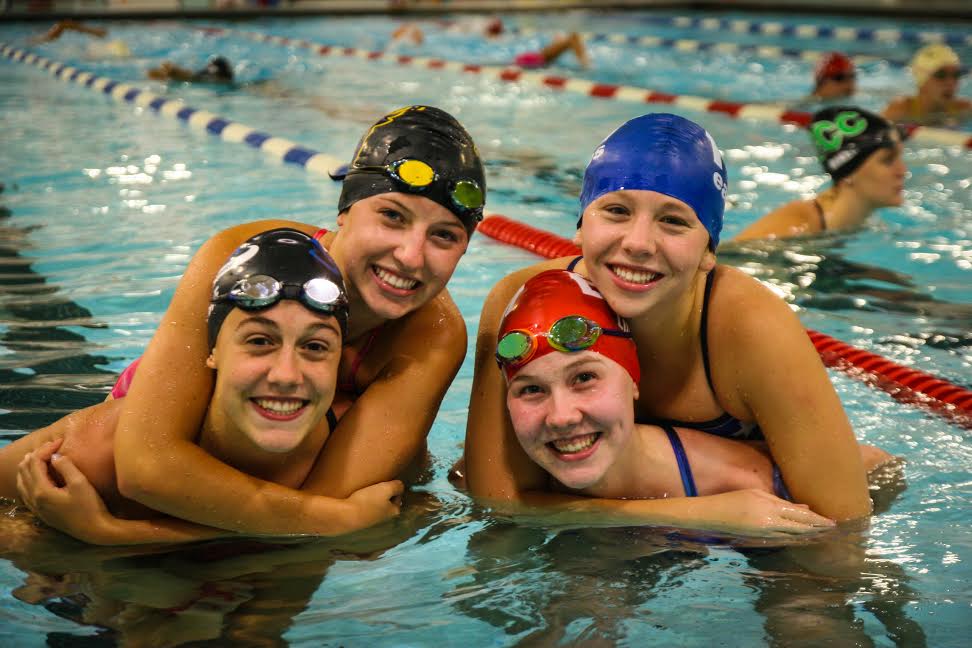 Girl’s swim sent five swimmers to state this year and the team placed fifteenth overall in the state.

In 2015, the U.S. Women’s National Soccer Team won its third World Cup Title and each player took home two million dollars of prize money. According to FIFA (Federation Internationale de Football Association), the German Men’s National Soccer Team players were each paid thirty- ve million dollars for winning the exact same title just a year prior to the U.S. Women’s Team. There is currently a drastic difference in how both men and women are paid when it comes to professional sports, and similar disparities are present at the high school level. Although there are many factors that determine wages, the recurring theme of women being discredited for their athletic accomplishments is not a new issue in our society.

In 1972, in an attempt to combat gender inequality, a federal law was mandated to ensure the equality of men and women in professional, college, and high-school sports. While the Education Amendments Act, better known as Title IX, still applies to all educational institutions that receive federal funds, there are still many challenges that women face when it comes to competitive sports in general.

One of the major contributing factors of how women are treated in sports rests on the shoulders of the coach. Senior track and field captain, Amira Carter, has been playing sports throughout her BSM career including soccer, basketball, and track and eld. As she approaches her nal BSM track season, Carter reconizes the differences in the coaching styles when it comes to directing women in sports. “[I’ve noticed] that coaches have the tendency to pay attention more to those who perform the best at the beginning of the season, and typically, those are the guys. When more attention is automatically given to the guy’s team, the whole team is overall pretty divided,” Carter said.

Current coach of the Junior Varsity girls’ soccer team and junior high English teacher Ms. Callianne Olson has grown up playing soccer for over 17 years and has been on both sides of being a female athlete and coaching them. “[Coaches] either treat you like they are super afraid to hurt your feelings or they don’t understand how to communicate with girls. One thing that I found from coaching girls and being a female player is you always have to take into account what is happening outside of the sport. Guys can have an easier time leaving things off the field, but girls do not. And that doesn’t make it better or worse, I think that that can make a team so much stronger. But [coaches] have to be able to approach them the right way,” Olson said.

Not all athletes experience an extreme difference between guy’s and girl’s sports at the high school level. Sophomore Maya Argenta has never personally noticed a difference between the two. “[In swimming] we all use the same pool and have the same coach, so overall, it’s pretty balanced,” Argenta said.

Although there are divisions between male and female athletics in other sports, many efforts continue to even out the playing field. Not only is it vital for schools and the nation to encourage girls to play sports, but other issues must be addressed, including the handful of women as sports columnists and commentators. According to Talkers Magazine 2013, women make up just one percent of sports commentators on major cable broadcasting channels. By having more established female roles promoted in both sports and sports commentary, there will be more role models and inspirations for young female athletes who hope to advance in these careers.

In an attempt to address unequal treatment at the school level, Carter has learned how to overcome these issues mentally so she can focus on the season, despite the lack of attention she may receive. “I figure that whatever attention [coaches] give me is crucial. Although I may not receive as many corrections as the guys, I take them anyways. I try not to let it get under my skin, but focus on what I can do to be my very best throughout the season,” Carter said.

Similarly, in order for women to participate, sports must be promoted in an engaging way beginning at a young age. “I don’t know if it’s more recently, but I’ve been seeing more stigma around girls’ sports. So I think that it’s on schools and clubs to promote the inclusiveness of girls’ sports,” Olson said.

Within the BSM community, it is essential to listen to girls’ perspectives when it comes to their treatment in athletics. Some students believe that girls could be given the same attention if more female coaches were hired. “More coaching staff would be appreciated. This allows coaches the ability to talk to each individual athlete and help them become a better athlete at the beginning of the season, rather than the student just trying to adapt in the middle of the season,” Carter said.

It is clear that sports may not provide equal opportunities for women worldwide; however, it is vital for our society to demand equal representation of women in sports and to take steps in to counteract gender inequality at a national and local level.