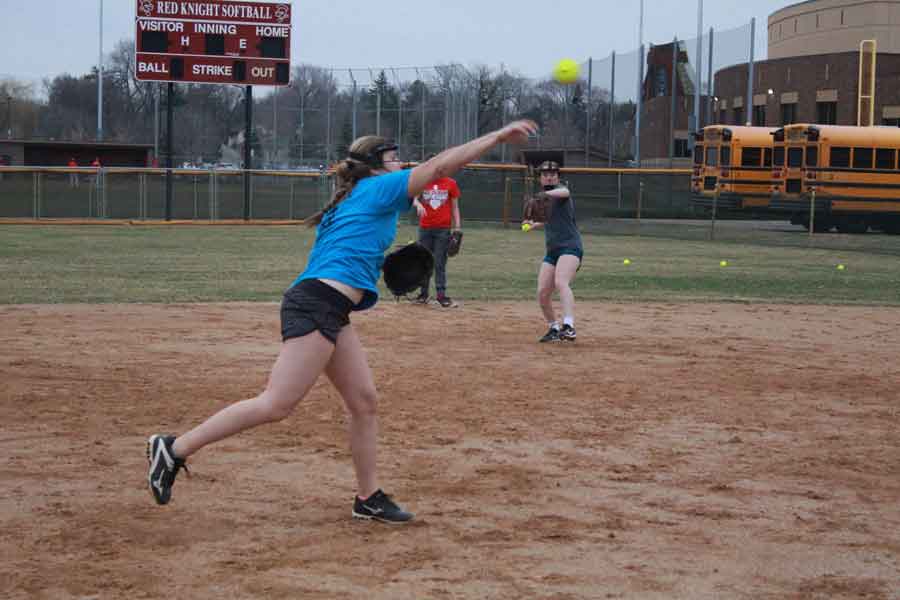 Junior Hattie Hoffman practices making a strong throw to first base in order to get the runner out.

Spring sports’ seasons are officially underway, and one team that is off to a fast start is the BSM softball team. With a 5-2 record, the team is looking to build off this early season success and make a repeat appearance to the State Softball Tournament this season.

This great record so far has been a team effort, but there have been many key contributors to the team’s success. “Sarah Houlihan has made some pretty important plays and come through with some big hits. She is really making a name for herself in the program,” senior captain Sedona Brown said. Another key player for the team in its first seven games has been sophomore Annabelle Hilson. “[Hilson] is a new sophomore pitcher, and she has kept us in games with her great pitching,” junior Hannah Nichols said.

The goal of winning State this season remains intact, and the team believes that this great start just gives them more confidence to achieve this final goal. “We are confident [that] we can compete at Sections and [go to State],” Nichols said. “I think [that going to State] is definitely achievable because while we may have lost some key players [from last year], we are still a very good team and [are] able to compete with our Section,” junior Hattie Hoffman said.

This early season success can also be attributed to the bond that the team shares. “When our team works hard on the field, we not only improve our physical capabilities, but also our unity as a squad, which allows us to excel as a team in games,” Nichols said.

The team will look to continue their winning ways and make it back to the State Tournament, which is held in early June at Caswell Park in Mankato.