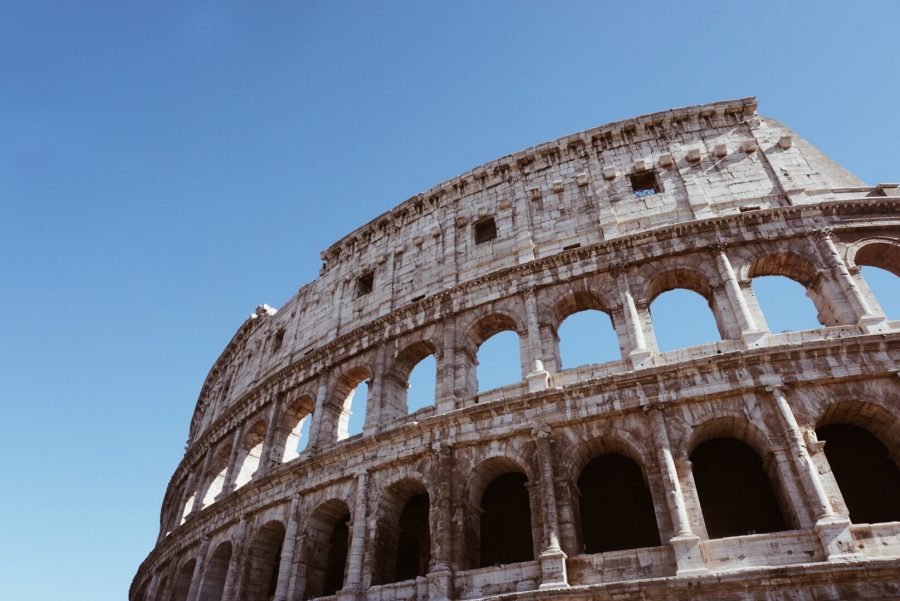 BSM students went on a spring break trip to Italy, and they visited the Colosseum.

This year, 21 of BSM’s sophomores, juniors, and seniors ventured to Italy over spring break, supervised by senior high Latin teacher Rob Epler, choir teacher Nancy Stockhaus, and campus minister Mike Jeremiah. For many of these students, this was their first time visiting Italy.

They visited museums, shopping venues, glass buildings, St. Peter’s Basilica, and took gondola rides down the canal in Venice. The group flew to Venice where they stayed for two days. From there, they traveled to Florence, San Gimignano, Naples, Pompeii, Sorrento, Capri, and Vatican City. The group found a lot of balance between free time to explore by themselves as well as seeing historical sites, sacred religious places, and archaeological remains. “The trip was overwhelming in a good way. It didn’t hit me for the first three days that we were actually in Italy,” junior Grace Ryan said.

For senior Bryan Sauer, his favorite part was going through the Vatican City with Mike Jeremiah (Mr. J). “It was especially moving to be led by Mr. J through Vatican City because it was always a childhood dream of his to get to Italy, so it was pretty special to be a part of it,” Sauer said.

While visiting the city, the students saw some of the most famous Catholic artifacts and churches. “We got to see beautiful churches, and learn about religion and history,” junior Rachel Folkestad said.

Aside from Vatican City, another favorite spot was Capri. Folkestad really enjoyed touring the island of Capri because of the wide variety of attractions it offered. “The weather was really nice, there was good shopping, and we took a boat around the island. It was truly a beautiful adventure that is different than anything I’ve ever done before,” Folkestad said.

While visiting Capri, the students were able to spend time in nature. “We took a boat around the island looked at the caves and the island and explored. It was cool because a lot of celebrities live there,” senior Tyler Metz said.

The group also traveled to Florence, where they went on guided tours and visited the Gucci museum, and many students were struck by the stark differences between Italy and the United States. “I thought it was really different than America because they don’t use cars very often. In Venice, everyone gets places by foot, bike, gondola, or moped, and in Florence, there are barely any cars,” junior Peyton Schuldt said.

The trip was highlighted not only by the amazing architecture and historical sites but also some incredible food. “Each different region is known for a specialty, so it was fun to try something that was locally grown and made by people working there,” Metz said. Others were especially enamored with the deserts. “My favorite food was definitely gelato; I made a point to get it every single day,” Ryan said.

The students on the trip also met new friends as well as exploring a foreign land. Though many of the students didn’t know each other before the trip, they have all developed new friendships. “I knew a few people before the trip, but afterward I knew everyone. We are all pretty close friends now,” Folkestad said.