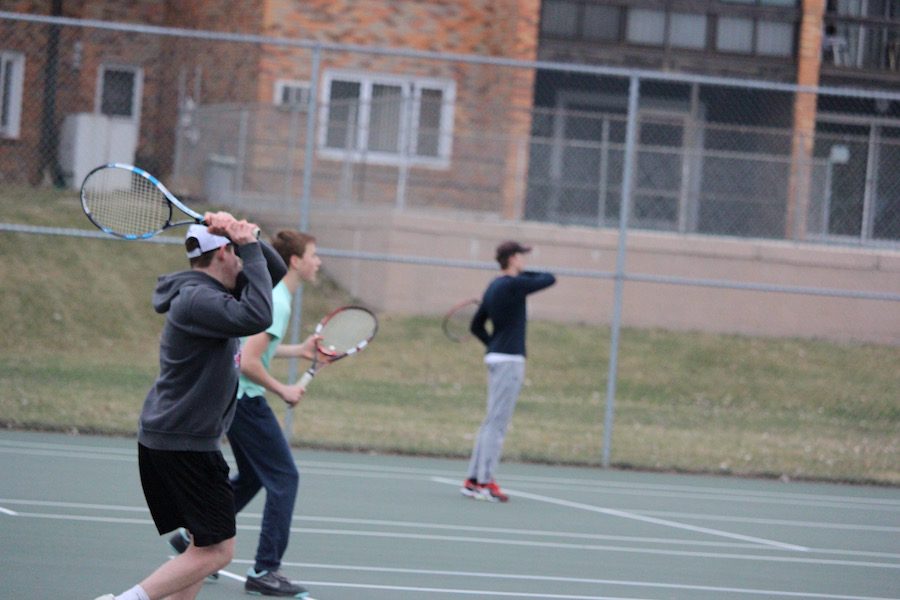 Senior captain Max Jablonski warms up during a practice.

The BSM boys’ tennis team looks to succeed this season despite losing key seniors, drawing on their strong senior leadership and extensive offseason training programs in order to break through to the State Tournament.

The team’s tryout process is extremely competitive.  The team plays head-to-head matches to see who can impress the coaches enough to earn a coveted spot on the varsity roster.  “The week-long tryout process consists of head-to-head matches being played to determine who makes it, so the bubble players have the power in their hands to make the team,” senior captain Max Jablonski said.

The team lost three seniors from last season, all of whom played vital roles in the success of the team.  “The biggest loss had to be Simon Guzan who was a 6-year varsity player and our top player for the past 3 years. We also lost character guys like Ryan Bischel and Sky Brown who really helped build the team’s identity,” Jablonski said.

Even though the team has lost this key senior talent from last season, the team has a strong group of underclassmen that can step up to fill their shoes.  “We lost our #1 player on the team but we expect [juniors] Tristan Fjelstad and Ryan Frost to fill in for that position,” Spindler said.

During the season, however, the team ramps up their training significantly, having practice every weekday and on Saturdays, in addition to weekly meets.  “During the season we have practice for 2 hours every day and a match 2 or 3 times a week,” Spindler said.

The team has a very tough schedule this season as usual, but they will look to continue the trend of dominating the Metro West Conference this season.  “Our first four matches are against teams that we lost to last year with Orono, Edina, Blake and Wayzata, and avenging any of those losses would be great to start the year off with momentum,” Jablonski said.  “We were able to sweep the Metro West for the second year in a row last year so we will look to continue to build on our Conference dominance.”

The team is full of talented players that will have to step up to help the team to reach their goals this season.  Among these players are two juniors who already have State Tournament experience as well as an emerging junior high athlete.  “This year we are expecting a lot out of juniors Tristan Fjelstad and Ryan Frost. As a doubles team, they qualified for state last year and we expect them to carry that momentum and lead our team this year,” Jablonski said.

The team has one main goal that they have their eyes set on this season: to make it to State.

In order to achieve this goal, they will have plenty of formidable squads that they will need to knock out in the Section Tournament.  “The main goal is to make it to State,” Spindler said.  “This year, with Wayzata out of our section, we know we will have to knock Edina out, the team that has ended our season the past two years,” Jablonski said.

The first match is Tuesday, April 11 against Orono at Aquila Park.