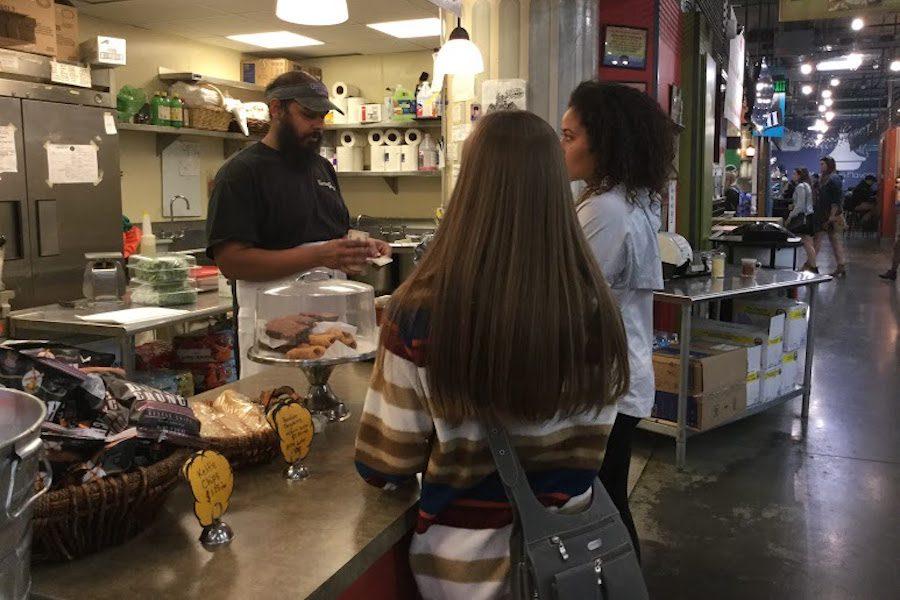 To witness the cultures they study in Immigrant Literature, students went on a field trip. This included going to a Hmong market, where they interacted with the vendors.

The Immigrant Literature class, taught by senior high English teacher Ms.Katie Belanger, accompanied by theology teacher Ms. Becca Meagher, went through the Twin Cities to learn more about the groups of immigrants that settled in Minnesota.

Located in Minneapolis, Mercado Central is a place made up of 45 different shops that are Latino-owned. “At Mercado Central, I had a tamale de pollo (chicken tamales) and atole de fresas, which is like a warm strawberry drink, which was the best,” senior Andrea Ochoa said.

The shops at Mercado Central contain food, clothing, beauty salons, and more. “We have students who are familiar with the culture and what we were eating and who had a deeper background with Latinos, which made the experience great,” senior McKenzie Dunleavy said.

At the Minnesota History Museum’s exhibit “They Chose Minnesota,” students learned more about the groups of people who immigrated to Minnesota. “We looked at the immigrants who have predominantly settled in Minnesota (Russian Jews, Somali, Hmong, Mexican, Swedes) and we had trunks of artifacts to learn more about their story,” Belanger said.

Then at the Hmong market, the students interviewed a vendor and learn more about their culture. “We went through looking at different shops and talked to the people who run the shops,” junior Taylor Sudduth said.

Afterward, the class went to the Somali Museum, where they were led by Mohamed Osman Mohamed. “The Somali Museum has a beautiful story about how Mo[hamed]’s dad wanted to preserve their culture and he went back to Somalia and saved artifacts to keep their culture,” Belanger said.

At the end of the day the class went to the chapel to listen to theology teacher Ms. Claire Shea and her husband Oz Hussain talk. “Oz as asked to speak to the Immigrant Lit class on Islam, his experiences of being a Muslim in America, and how he as a person, and our marriage, has been affected by the current climate in the US. Oz is also in education, so he’s a firm believer in the importance of first person experiences and stories,” Shea said.