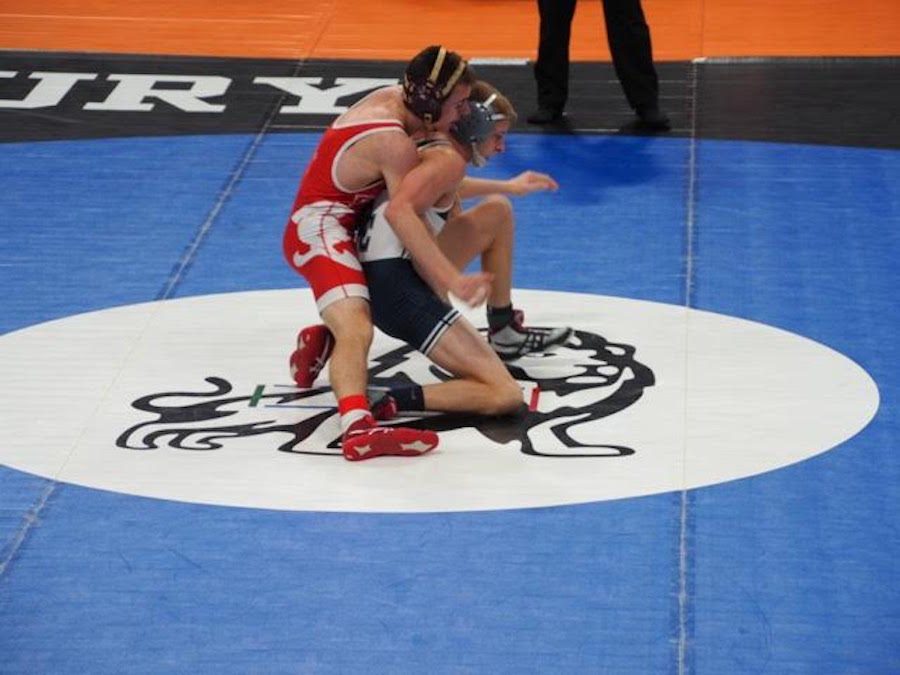 BSM has had many notable State appearances this season, with the dance, football, and girls’ soccer teams all taking home State Championships. BSM senior wrestler Zach Bigelbach strived to achieve the same fate as the athletes on those other BSM teams.

Each weight class in the Section 5AA Wrestling Individual Tournament is made up of 7-10 guys, depending on how many teams have an athlete in that weight class. The head coaches of each team meet earlier in the week before the meet to seed each bracket, which worked out favorably for Bigelbach. “I ended up winning the [Section] Tournament. I had a bye the first round, I pinned my first opponent, I tech falled my second opponent 16-0, and I pinned my final opponent in the first period,” Bigelbach said.

The Section Tournament is extremely difficult for wrestling, especially for BSM, who competes in Class AA for wrestling. “Zach was the only one who made it through Sections; we have a very tough section for AA,” senior captain Grant Gustafson said.

Out of all of Bigelbach’s matches at the Section 5AA Individual Tournament, the second match was the one that posed the greatest challenge for him, as he pinned his competitors early on in both his first and third matches.  He had the adrenaline coursing through his veins and he was able to come out on top in an evenly-matched contest. “I was most nervous for my second match. My opponent and I had wrestled a lot of the same people and I thought we were going to be really evenly matched,” Bigelbach said.

Bigelbach was thrilled to make it to State. It’s been two years since he was last there and he’s been working toward this accomplishment for the entire season. Since he was the only one to make it to State from BSM, he had to prepare differently than he normally would going into the State competition. “I decided to go across town after school and practice with Totino Grace [who made it to State as a team] in the week leading up to State,” Bigelbach said.

Bigelbach doesn’t have a formal routine that he has carried out throughout the season. He did, however, bring Gustafson over to the Xcel Energy Center for State as his practice partner, so that he could do his usual warm up shots and situations before each match at State.

Bigelbach is pumped to have made it through a tough Section and to the State Tournament, but now that he’s there he wants to have success at State. “My main goal is to win a match at State, and if I were to place I would immediately try to do a backflip,” Bigelbach said.

Bigelbach only got to compete in one match at State. Unfortunately in the State Wrestling Tournament, if you lose your first match, then the person that beats you has to win their next match in order for you to stay in the Tournament. The wrestler that defeated Bigelbach in his first match subsequently lost to the first seed in his following match, so Bigelbach was out. ”I was winning [for] most of my match and I ended up getting turned and pinned in the final period, so I was a little disappointed,” Bigelbach said.