Four senior student-athletes sign to play for Division I programs 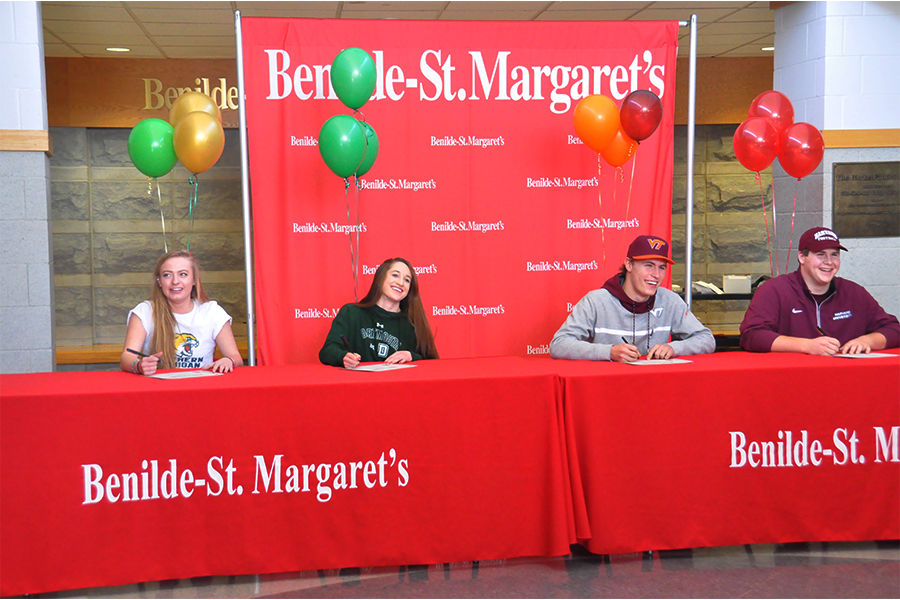 Senior girls’ hockey player Megan Cornell has committed to play hockey at Dartmouth College. Cornell started playing hockey over ten years ago when she was six years old. “Growing up my parents would sign me up for various sports just to see which sports I liked–pretty much one for every season. So when we were looking at a winter sport they just signed me up for hockey,” Cornell said.  “Also my older brother played hockey so it was easy to get started. After that, I loved the sport and continued with it.”  When her parents took her to games when she was younger and after she started playing herself, the passion for hockey grew larger for Cornell.

While getting other offers from other schools, Cornell’s decision all came down to visiting Dartmouth. “I knew I wanted to go to Dartmouth after my first visit. After I left [Dartmouth] there wasn’t really anything I could say I didn’t like about it. I loved the programs at the school [and] the campus, and the coaches were really nice,” Cornell said.

Now that she has chosen Dartmouth, Cornell has met her coaches and teammates. “I met the coaches last summer and I really liked both the head coach and the assistant. I was able to meet the team a couple of weeks ago and they were really welcoming, nice, and fun to be around. So I’m excited to have the opportunity to play with them,” Cornell said.

Another component of being a successful athlete is having a great support system, and part of that support system includes family. “My parents have made it possible for me to play [hockey] and they’ve always been there. I can’t think of a time when at least one of them wasn’t at a game,” Cornell said.

In addition to Virginia Tech, this past fall Derek also received offers from Butler, Illinois, Creighton and Tulane, but on February 1 he had decided that Virginia Tech was the best fit for him. “[The] biggest factor was the feel–[they have] great academics, and I just felt very comfortable [there],” Drees said.

During the 2016 regular season of his junior year, Drees only allowed 11 earned runs and 24 hits in his 27+ innings pitched. Drees also had a regular season ERA of 2.82 and did not give up a single run in the postseason. In the Section 6AAA Playoffs, Drees pitched 13 innings without giving up an earned run, including a dominant seven-inning complete game against Hutchinson in the Section 6AAA Championship Game, which propelled the Red Knights to a fourth-place finish in the State AAA Tournament.

In addition to his skill on the mound, Drees was also a major offensive contributor for the Red Knights last season.  During the regular season, Drees finished with a .403 batting average, with 11 runs batted in and a .474 on-base percentage.  Drees hopes to make just as big a contribution during his time at Virginia Tech as he did at BSM. “[I want to] make the biggest impact on the program possible throughout my four years [there],” Drees said.

Drees has performed at a very highly level on the baseball diamond for BSM and hopes to carry that trend on to Virginia Tech. “I’m looking forward to playing in an ACC environment at a competitive level,” Drees said.

While at Virginia Tech, Drees also plans to study business and journalism.

Hard work and dedication pay off. Many people work hard to make their passion a reality. Senior football captain and offensive lineman Eric Wilson committed to Harvard University to play football, continuing his passion for the game into college.

Growing up in a big football family, Wilson knew that he wanted to play football in college right away and joined a team in fourth grade. “As I got more into it, my family started helping me out; they [helped] me get recruited and helped me get [to be] where I am today,” Wilson said.

In order to come in contact with college coaches, Wilson participated in camps where he connected with the coaches. “I chose Harvard because it felt like home there; it has a great community that I wanted to be a part of, and I love the environment, [for] academics and athletics,” Wilson said.

Many people have supported him through the years, helping him to get to this point. “My family gave me a lot of support, as [did] my teammates and coaches,” Wilson said.

Wilson also trains at Perfect World Training in St. Louis Park to increase his strength for the game. “[The] combination of a great support group helped to get me to where I am right now,” Wilson said.