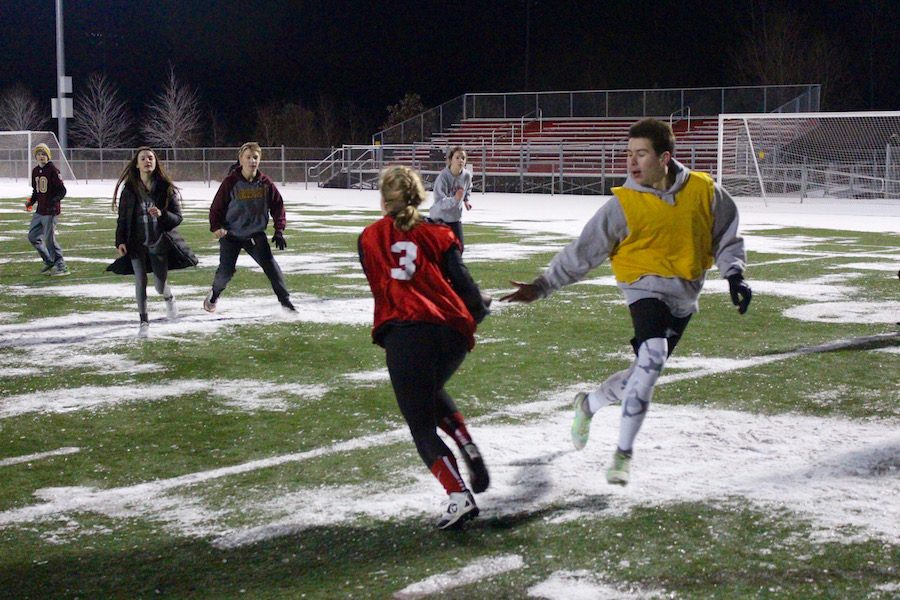 Junior Sam Zimmerman hands the ball off to his teammate, junior Tenley Gage.

The annual Knightlife-sponsored snow football tournament recently took place under the lights of the BSM turf. Students formed their teams and took to the snow-covered field to compete for bragging rights and Chipotle gift cards.

Snow football brings together Knightlife members and non-members from all grades to compete against each other in an entertaining and substance-free environment. “People love the competition snow football brings. Plus, the prize helps motivate you to get out there; who doesn’t love Chipotle?” senior Knightlife leader Elsa Beise said.

The event began around 5 p.m. and lasted well over three hours. Waiting in the library for snow footballers after the game was warm hot chocolate, cookies, pizza, and other goodies. Additionally, there was a showing of “High School Musical” on the projector.

Senior Jack Beutz, a BSM football player, participated on the victorious snow football squad, “Team YNK.”  “[Snow football] is a relaxed brand of football; you get to enjoy at a truly unique temperature, and our team had the kind of chemistry you can’t really put into words. Winning snow football can only be described as true elation—a feeling that will simply be hard to replicate,” Beutz said.

Even those who did not leave the turf victorious enjoyed their snow football experience. “I really enjoyed the event. Even though my team didn’t win, we had fun and worked well together as a team,” sophomore Maggie Emmer said.