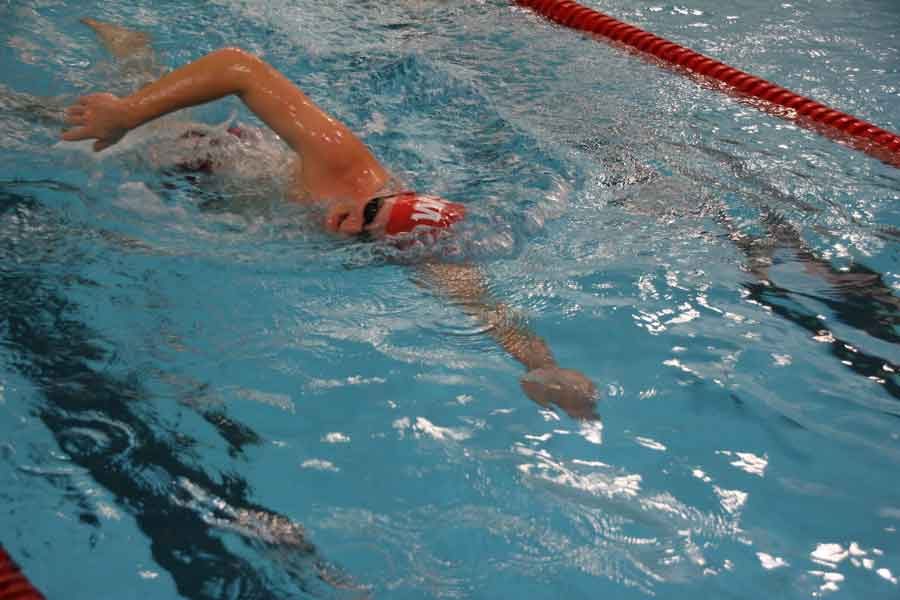 Senior boys' swim captain Tyler Metz now has four school records and is seeking to capture the State title in the 100 Free this season.

In 2008 Michael Phelps stole the show at the Beijing Olympics, winning eight gold medals and catapulting swimming into the forefront of American sports. It was in this atmosphere that senior boys’ swim captain Tyler Metz developed as a swimmer. As Metz’s talent emerged in the pool he took his talents to BSM where he earned a varsity letter and swam on relays at the State A Meet in ninth grade. As Metz has progressed with his high school swimming career he has set multiple school records and has established himself as one of the best male swimmers BSM has ever had.

A major part of any sport is training–as they say, “perfect practice makes perfect”–and swimming is no different. Swimming presents a particularly difficult form of training, with constant motion in the pool. Lap after lap swimmers perfect their craft in an effort to lower their time by any amount possible. After the strain that swimming puts on your body it is important for one to fuel up, eat right, and replace all those calories that one loses in the pool. “I go to practice every day and we practice for 2.5 hours 6 days a week.  [Another key to performing is] also you just gotta eat right,” Metz said.

One key to success in anything one does, especially sports, is to have a love for the activity or at least a desire to improve your ability in the said task. For Metz, it is no different.  “I like swimming because it’s a good way to test yourself and compete with other people,” Metz said.

Thanks to the magnificent individual efforts of men like Michael Phelps, people tend to forget that swimming has a strong team aspect as well. Whether it is swimming on relays or swimming for the overall team score at a meet, you must rely on your teammates to win some events and points for the team. Thanks to great leadership from Metz and the other seniors on the team, this year’s BSM boys’ swim team is doing better than expected.  “The team is doing really well; we won our first meet unexpectedly, and we have a [larger] number of people this year so we should do better at competing,” Metz said.

Throughout his career at BSM Metz has established himself as one of the best BSM swimmers to ever set foot in the pool, and he is inching closer every day to finding a way to being crowned the top swimmer in the 100 Free in the State. “My highlight [of my BSM swimming career] is getting 4th in State in the 100 Free [in 2016] and having three school records,” Metz said.

As for Metz’s future in the sport, he remains undecided on whether he will swim collegiately; regardless, his talents have stirred interest from college coaches, and if he does decide to pursue swimming at the collegiate level, success is sure to follow. “I might pursue [swimming]  in college; I have talked to a couple [college] coaches, including [those from] NYU and Columbia,” Metz said.