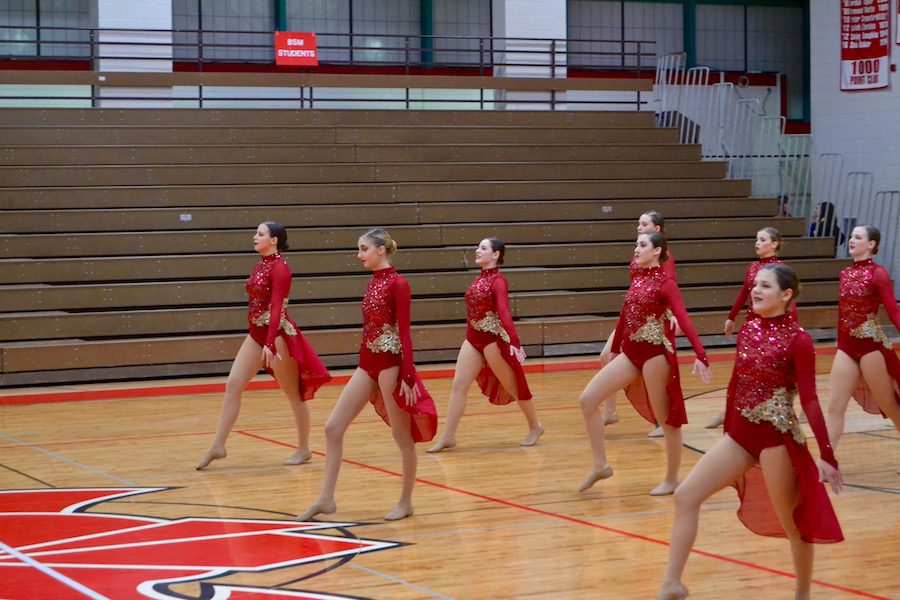 The Dance Team got 1st Place in Kick and 2nd Place in Jazz at the Metro West Conference Championships on January 10, and they next compete on January 28.A

The Knightettes were all ready for competition at Chaska High School for the Metro West Conference Championships on Tuesday, January 10.  They got their outfits on and were looking to take home the Conference title.

The captains were hoping for big things at this meet after the work the team had put in throughout the season.  “We were feeling very confident going into Conference Champs with our streak of wins throughout our conference season,” senior captain Celia Fortney said.

The Knightettes felt ready for the meet but were still nervous for this big competition.  “I felt confident, but nervous because we were a single point behind the first place team. We haven’t gotten conference champs in a long time so it would’ve been cool to get it my senior year,” senior captain Morgan Hovanec said.

Chaska was their biggest competition at the event.  The Knightettes were hoping to succeed in both jazz and kick but traditionally have been the best in jazz.  “We felt good about both, and our scores showed both performances were very well done,” Fortney said.  “We didn’t feel great about jazz since we were all sick and super tired, but we pulled it back in for kick and felt great after we danced,” Hovanec said.

When all was said and done, the Knightettes ended up taking first place in kick and second place in jazz.  “We felt ecstatic that we had beaten Chaska in kick by 14 points and in jazz by 4 points,” Fortney said.  “[We were] kind of bummed with our jazz, but super excited that we beat an AAA state winning kick team–especially since we barely made it to State finals in kick [last season],” Hovanec said.