Red Knotes to compete at ICHSA in February 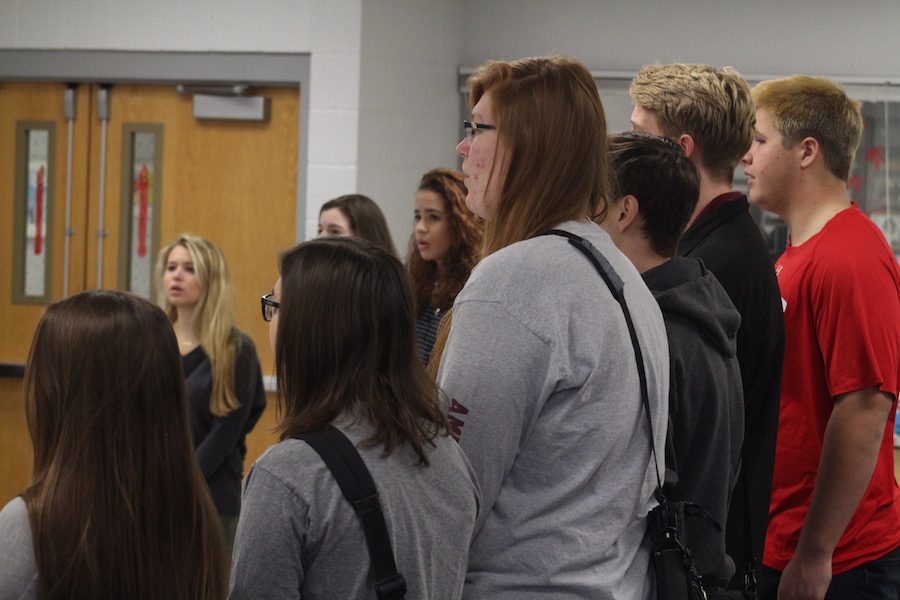 The Red Knotes practice one of their songs for the ICHSA Competition. They will continue to practice every week in order to get ready for the competition.

The BSM a cappella group, the Red Knotes, has been selected to compete in the International Championship of High School A Cappella, also known as the ICHSA, beginning with the sectional competition. In order to make it to the finals in New York City, groups across the nation must first compete at sectionals, and then at regional finals. The Red Knotes will compete in their sectional competition in Port Washington, Wisconsin, on February 11, 2017.

To enter this competition, the a cappella group made a video of themselves singing three pieces: “Big Black Horse and A Cherry Tree” by KT Tunstall, a jazzy version of the National Anthem, and “Don’t Stop Me Now” by Queen.

Making it to the ICHSA has been a big goal for the Red Knotes’ directors and is an amazing accomplishment, though the students had no idea what was coming up. “We [the students] actually were clueless and didn’t know what we were auditioning for,” sophomore Matthew Hansberry said.

Founded just this year, the Red Knotes started as a casual group of students who loved to sing a cappella. Now that they’ve made it into the ICHSA, directors Ms. Nancy Stockhaus and Mr. Adam Petroski are investing more time and energy into the group. “Stockhaus and I have put in a lot of work and early mornings to make the Red Knotes sound great. We have also been waiting for this [competition] for months now, so it is exciting to see our plans [on entering it] unfold perfectly,” Petroski said.

The Red Knotes will sing in a sold-out theater filled with more than 800 people. The Red Knotes are continuously realizing how big of a deal this competition is. As the intensity of their rehearsals has increased, they’ve begun to do research on other groups to familiarize themselves with the competition. “A couple of Red Knotes have started doing some research and watching videos of the other groups and are learning that this is a pretty big deal. There are 12 groups attending, and we are the only a capella group from Minnesota and the only group who is brand new to the a capella world,” Petroski said.

At this competition, the Red Knotes will sing against  experienced high school a cappella groups, some of which have been able to win the entire competition. Although the competition is difficult, the teams show good sportsmanship and cheer for each other. The singers are looking forward to this environment and seeing other a cappella teams. “I am most excited for the experience and getting to meet new people,” Hansberry said.

This competition also presents opportunities for the recognition of individual singers. “The last time I brought students to this competition [from a different school], our beatboxer won ‘best vocal percussionist.’ This is a pretty prestigious award since the groups there are so talented,” Petroski said.