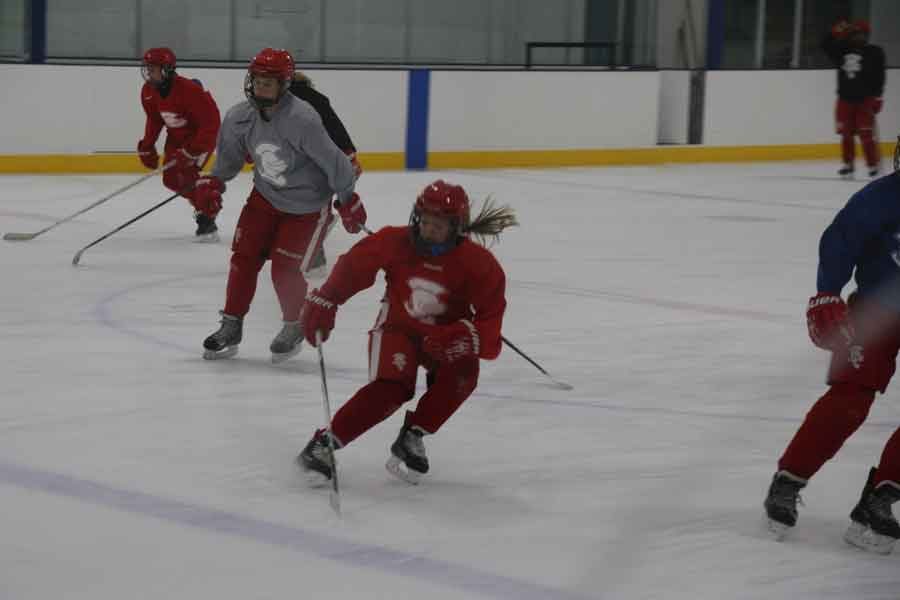 Doing killers is one of the exercises that the girls' hockey team does to be in the best shape they can to be win as many games as they can this season.

As fall wanes and the cold winter months begin, so does hockey season. Coming off a season in which the BSM girls’ hockey team posted a 8-17-1 record, the girls are looking to compete and impress this year.

The squad has been putting in work to prepare for the season. From the summer workouts with Joe Creer to the dry land sessions after school, they have left nothing to chance in their quest to improve upon last year’s losing record. “We worked out with Creer [over the summer], and we did some captains’ practices with Jenny Potter,” senior captain Grace Peluso said.

On the long journey that is the hockey season, a coach’s duty is to act as a guide for the team; the BSM coaching staff undoubtedly fills this role. With duties ranging from encouragement to game planning, a quality coaching staff is a boon to any sports team. “[The coaches] continue to push us to do the best we can,” senior captain Megan Cornell said.

The girls will need everyone on the team to fulfill their part and work together to accomplish their season objectives.  Hockey is a team sport; whether they’re a goalie, forward, or defenseman, every player on the team will contribute all they can to have a successful season.“The goal for the team this year is to win. We’re really working on battling in front of the net and in the corners. Just winning every one-on-one battle,” Peluso said.

Every play is a battle: from one-on-one battles to face-offs, scrums in the corner, or penalty kills and power-plays, the aim of any team is to emerge victorious from every little battle they can. “We’ll be competitive in almost every game, but I don’t really pay attention to that; I just try to go [into] every game with the mindset of winning,” senior captain Sedona Brown said.

With the demanding schedule that the team has this season, bringing a winning mentality to the table is key. Although the team lost a handful of great players last year, they’ll look to gain experience and compete in every game with the goal of winning.