Semler is has excelled as a BSM varsity swimmer since seventh grade, and she's about to jump into the State Tournament as one of the best swimmers in Minnesota. 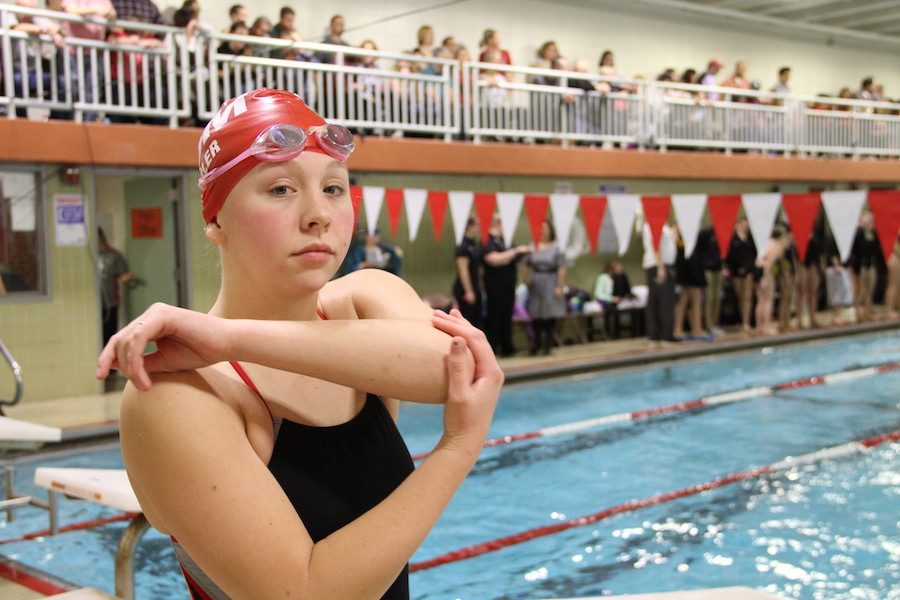 Senior captain and six time state competitor Madison Semler is about to jump in the pool and make some waves.

For high school students, the state tournament is often the pinnacle of their sporting experience. At the Minnesota State High School League (MSHSL) state tournament, the best-of-the-best in their respective sports gather to compete for ultimate title: state champion. Qualifying for just one of the aforementioned tournaments is impressive, but as one senior knows, one isn’t enough.

Senior Madison Semler—a Red Knight since seventh grade—has seen her fair share of success on girls’ swim team. “I’ve been at BSM for six years, have been on the varsity swim team for six years, and will have participated in six tournaments by the time I graduate,” Semler said.

From a young age, Semler has always had a love for the water.  “I’ve always been a big water bug, and when I was five, I started swimming because I loved pools and waterparks. I was never into traditional ‘girl’ sports like volleyball, so when I parents asked if I wanted to join a swim club, I jumped at the opportunity,” Semler said.

One of her favorite experiences as a varsity swimmer is sharing the pedestal with her older sister Amanda Semler. “In seventh grade, I finished my race, looked back at the clock, and realized I’d made it to state while swimming in the lane next to my older sister. We were both so happy and we hugged because we were both going to state,” Semler said.

The fourth place finish in 2014 is a time that Semler will remember for years to come. Semler, along with teammates Claire Torgerson (‘17), Grace Hedin (‘16), and Ava Schieffert (‘19) still hold the school record in the four-hundred freestyle, with a time of 3:36.86. “It means so much to me. I get to share a small piece of BSM’s history, and whether or not someone breaks the record in the future, it’s a moment I’ll always remember sharing with my teammates,” she said.

Continuing to make it state and being apart of the team has made an impact on Semler, in and out of the pool. “It’s helped me to learn that hard work is the only thing that gets results in the end; you can’t cut corners. After going [to state] once, you want it more and more. The feeling of swimming for my school at state is indescribable, and that feeling never gets old,” Semler said.

With the upcoming 2016 state tournament being Semler’s last, she’s still looking to improve her times. She doesn’t want to swim at the collegiate level, so Semler knows she has to give it everything she has for last race in the pool. “I’m looking for a personal best in the two-hundred, which I’ve been doing well on so far this season. I have thought about swimming in college, but I didn’t want it to be my whole life in college. I’ll probably join a swim club, where it’s less of a time commitment,” Semler said.

Through all of her success, Semler knows that it’s all about the team; she’ll never forget the memories and lessons that swim team has given and taught her. “Swim team is unique because we all come from different grades and friend groups. We all come together as a team, and get along really well. I’ll miss my comradery with the team; it’s like my second family and I can’t imagine next year without them,” Semler said.