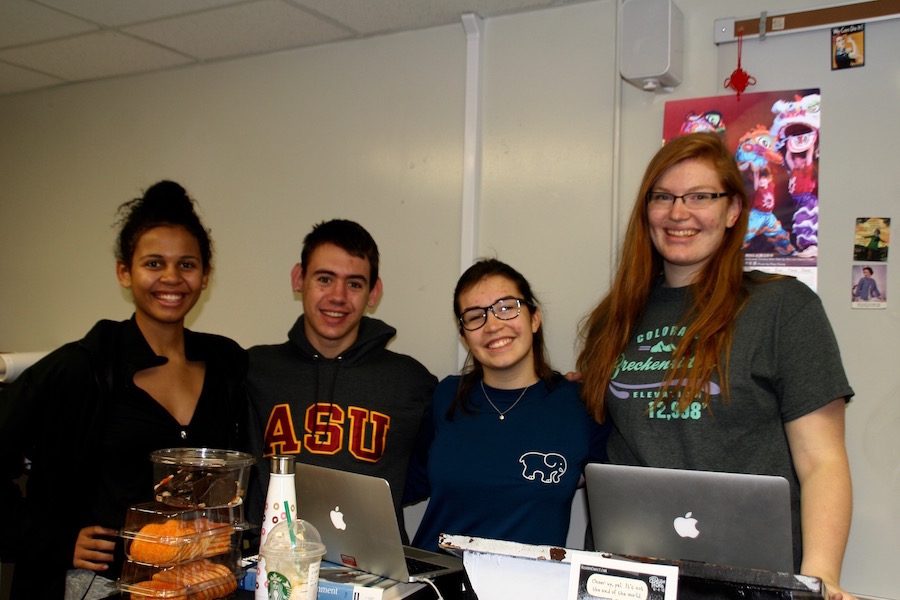 The NHHS (from left to right): Morgan Bettin-Coleman, Zach Bigelbach, Macy Rooney, and Teagan Wolf, are all rejuvenating what used to be the History Club.

The National History Honor Society (NHHS) has officially made its way to BSM. Since last spring, lead officers have been working with Mr. Pauly to make NHHS a reality. Affiliated with the National History Club, an organization that allows its chapters to choose both the projects members participate in and the requirements (if any) for membership, NHHS will include activities like historical movies, personal anecdotes, and kahoots.

Formerly known as the History Club, the organization itself is not new to BSM. President of NHHS and senior Teagan Wolf felt that a change was needed to both attract new members and keep them engaged, and she knew that a change was needed. “It used to be called the History Club, but it had really small numbers. I didn’t want to portray it as something nobody wanted to do. I knew that rebooting it as the NHHS would surely help bring in more people and interest,” Wolf said.

When history club was revived last fall, it struggled to recruit new members due to a lack of interest and notability. “Last year, it was about fteen people who were active in the group. Almost all of them were seniors,” Wolf said.

Wolf, along with vice president Morgan Bettin-Coleman, historian Macy Rooney, secretary Zach Bigelbach, hoped that bringing NHHS to BSM would attract a whole new group of Red Knights. “It’s definitely a different demographic from History Club. We’re able to call it an honor society because of the academic requirements, and it’s not just people who enjoy history, but people who have excelled in it or want to challenge themselves in the realm of history,” Rooney said.

Excellence in social studies is one the requirements for being a member of NHHS. In addition to attending ten of eighteen Friday morning meetings, members must take at least two AP social studies classes before graduation. Semester-long classes like AP United States Government and AP Comparative Government each count as a class, so a student taking both would fulfill this requirement. Members must also have a 3.3 GPA in these classes, and maintain a 3.0 cumulative GPA throughout high school.

As a reward for sustained membership, a burgundy cord will be given to NHHS members at graduation as a token of their excellence in social studies. “We know it’s unavoidable that people will be thinking about college applications when joining NHHS. We welcome that, and understand that it’s a part of the honor society; people want the chord,” Bettin-Coleman said.

All four officers hope that NHHS will be apart of BSM for years to come. “I want to increase involvement not only with members, but with the whole student body. I want it to be a more central focus of the social studies department, and one day be on the same level as the National Honor Society,” Wolf said.