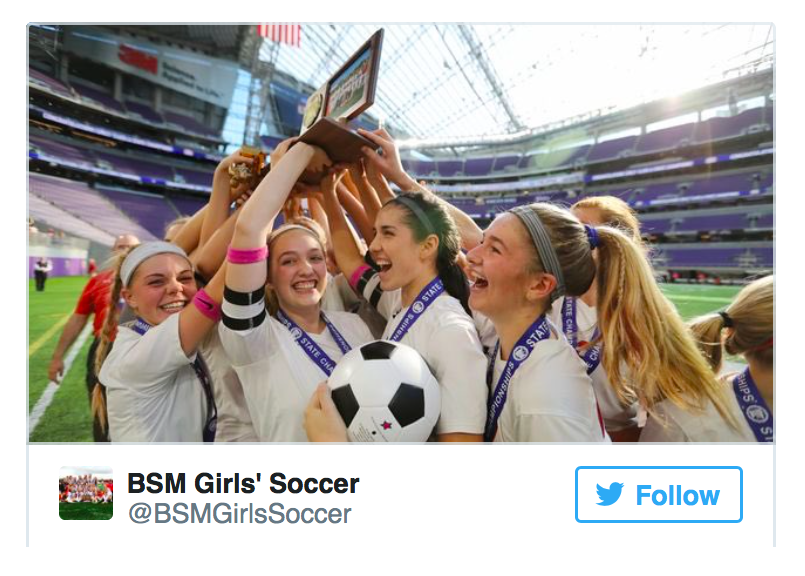 The BSM girls’ soccer team has taken home the State A Championship for the second consecutive year and the fourth time in the last five years, as they defeated the Mankato West Scarlets 2-1 on Thursday, November 3, at US Bank Stadium in Minneapolis.

After blowing out the St. Cloud Apollo Eagles 6-0 in the State A Quarterfinal, they muscled their way through a close 3-2 win over the Hill-Murray Pioneers in the State A Semifinal, which was decided by Claire Van der Heide’s goal with less than 3 minutes remaining in regulation.  The Red Knights have been carried on offense by junior Vivian Shinall, who has scored six goals in the State A Tournament and recently won the Hardware Hank “Nuts and Bolts” Athlete of the Week Award, and defensively by their goalkeepers–senior Amira Carter and especially junior Claire Grazzini, who had many key saves against Hill-Murray that helped BSM to be in position to win another State title.

In this contest, it did not take long for the Red Knights to gain a lead.  Less than 30 seconds in to the game, sophomore Amanda Cassidy found the back of the net to make it 1-0 BSM; she was assisted by senior captain Maren Noble.  Later in the first half, Noble scored a goal of her own that was assisted by Shinall, making it 2-0 BSM, which would hold up until halftime.

Mankato West would not go down without a fight, as Rachel Luedtke headed a ball into the net less than 10 minutes in to the second half, which cut the Red Knights’ lead in half and made it 2-1 BSM.  This would be the only goal that Grazzini would give up, as she again made several tough saves in the second half, including one that was initially mishandled and would have tied the game with just one more revolution of the ball.  The Red Knights were simply too much to handle for the Scarlets, and they ran out the clock to win the first Class A Girls’ Soccer State Tournament played at US Bank Stadium by the score of 2-1.

With the win, the Red Knights have solidified that they are the team to beat in Class A Girls’ Soccer, having now won the State title every year for the last five years except for one (in 2014).  BSM now will enjoy the sweet taste of victory for the entirety of the long offseason before looking to hoist the State Championship trophy again next season.