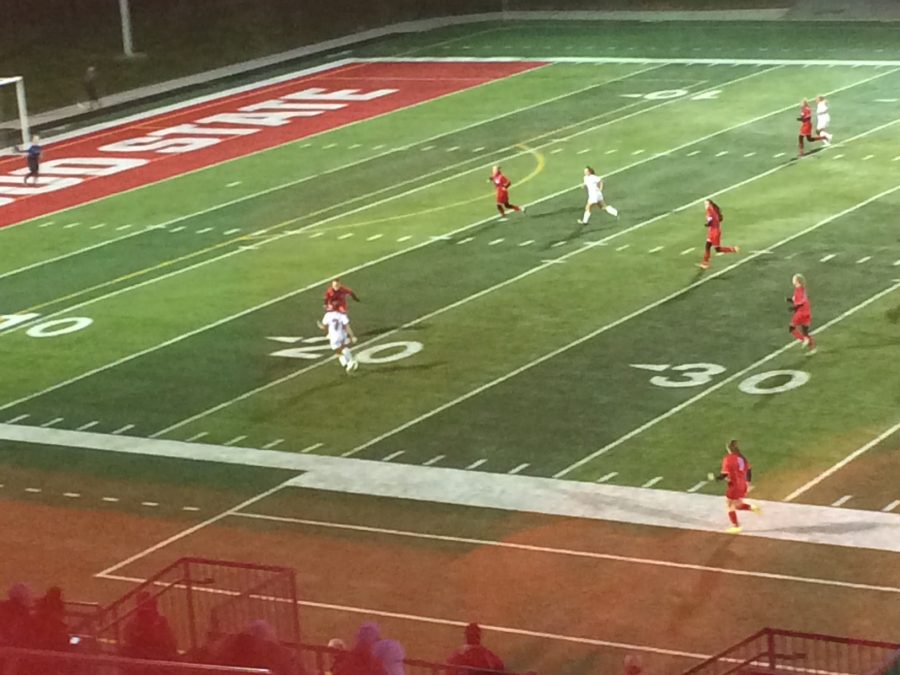 Sophomore Amanda Cassidy dribbles the ball towards the goal as BSM blew out St. Cloud Apollo in the State A Quarterfinal. Cassidy had one goal and two assists in the win.

The BSM girls’ soccer team clobbered the St. Cloud Apollo Eagles 6-0 in the State A Quarterfinal on Thursday, October 27, at Husky Stadium, on the campus of St. Cloud State University.  Temperatures were below 50? consistently throughout the game, but the Red Knights were able to battle the elements and come out with the huge victory, as junior Vivian Shinall scored four goals and the Eagles were unable to garner many quality scoring chances against the BSM defense and senior goalie Amira Carter.

In the early going, neither team was able to generate much offense for the first 15 minutes of the game, but the Red Knights then started to dominate field position and were nearly able to put the ball in the goal on multiple occasions.  Finally the Red Knights were able to get on the board when junior Claire Van der Heide fed sophomore Amanda Cassidy the ball, who in turn laced it into the net for a 1-0 BSM lead with 12:57 to go in the first half.

The Red Knights closed out the first half ahead by one goal, but the first 40 minutes were more one-sided than the score will admit.  The Red Knights put up 14 shots on the Eagles, while St. Cloud Apollo was only able to record 1 shot on Carter.

In the second half, after multiple Red Knights fumbled around with the ball on the goal line, Shinall got in on the action by scoring within the first two minutes of the half to make it 2-0 BSM.  Less than two minutes later, junior Maddie Stoks fired a corner kick towards the goal, which junior Ingrid Lundberg delivered into the goal for a 3-0 Red Knight lead.  The Red Knights continued to dominate the field position early on in the second half, as St. Cloud Apollo did not get close to creating any legitimate scoring threats against the Red Knights.

The Red Knights now advance to the State A Semifinal on Monday, October 31, at US Bank Stadium, new home of the Minnesota Vikings.  They will play either Waconia or Hill-Murray.