Boys’ soccer hoping for a trip to state this year 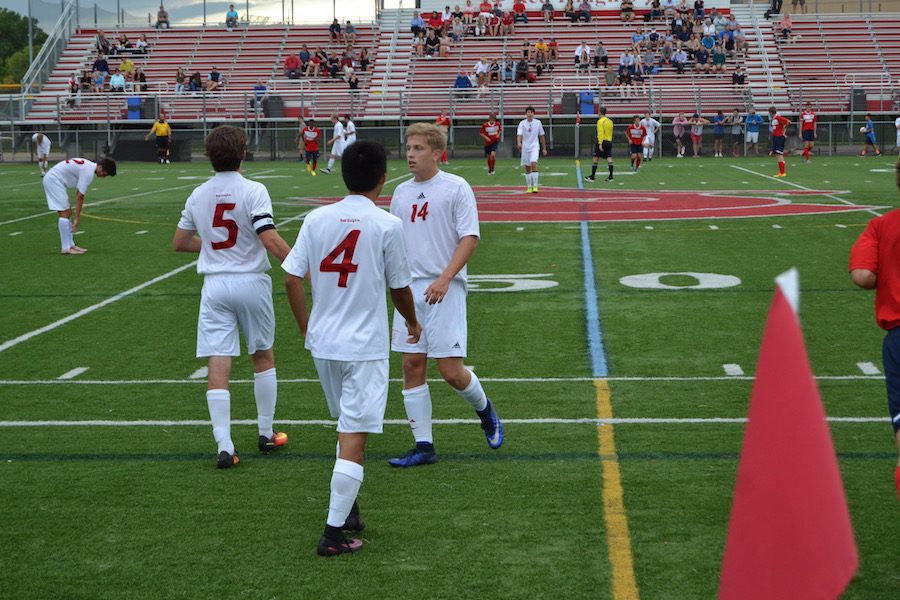 The Red Knights get ready for an intense match against Orono.

The boys’ soccer season is underway, and after an impressive season last year, the hope is that a trip to state is in store.

The season has started fairly well, with the team having a record of 1-2-1. “I think the team has done a good job so far.  We have had three games against Duluth Marshall, Eden Prairie, and Orono.  We have won one, tied one, and lost [two].  We held our own against Eden Prairie and Orono, who is the number one team in the state.  We had a chance to beat both of them,” senior captain Connor Lamb said.

Senior captain Noah Twesten also thinks that the team has done well.  “We’ve been able to come away with a win and a tie so we can’t be too disappointed with our results,” he said.

The team is full of new faces after losing many seniors.  “The team took a big loss this year, losing 13 seniors, and about seven of those were starters.  There is clearly a big hole to fill, especially having lost all of our starting center midfielders,” Twesten said.

However, there are many new and returning players that will help the team win many games. “We do have key players coming back, mostly in our defense with Connor Lamb, Cole Knickelbine, and James Norkosky, but especially with our star forwards Luke Horton and Colin Segner.  There are also new talents in midfielder Santi Lambert and new goalie Louis Hyde,” Twesten said.

Two players in particular that will hopefully bring the team great success are Colin Segner and Luke Horton.  “Luke Horton needs to score a lot of goals.  He’s been on the team since freshman year, and with that experience he should be able to lead our team into Sections.  I also think Colin Segner [will have] a big impact.  He’s very good at controlling the ball in the midfield, and will be our main guy to pass to Luke,” Lamb said.

After a disappointing loss to Breck in Sections last year, the goal is to make it to State.  “Our main goal this year is to go into Sections and beat Breck.  They have ended our season the past two years and are ranked the second best team in state.  We can absolutely beat them as long as we play our game and play to our potential,” Lamb said.

The team knows these goals will be tough to reach, especially with a tough schedule, but both Twesten and Lamb believe the team is capable of their expectations.  “As usual, our schedule is exceptionally hard, with our team playing much larger schools, but our team isn’t worried because we know that we have a strong team that wants to win,” Twesten said.