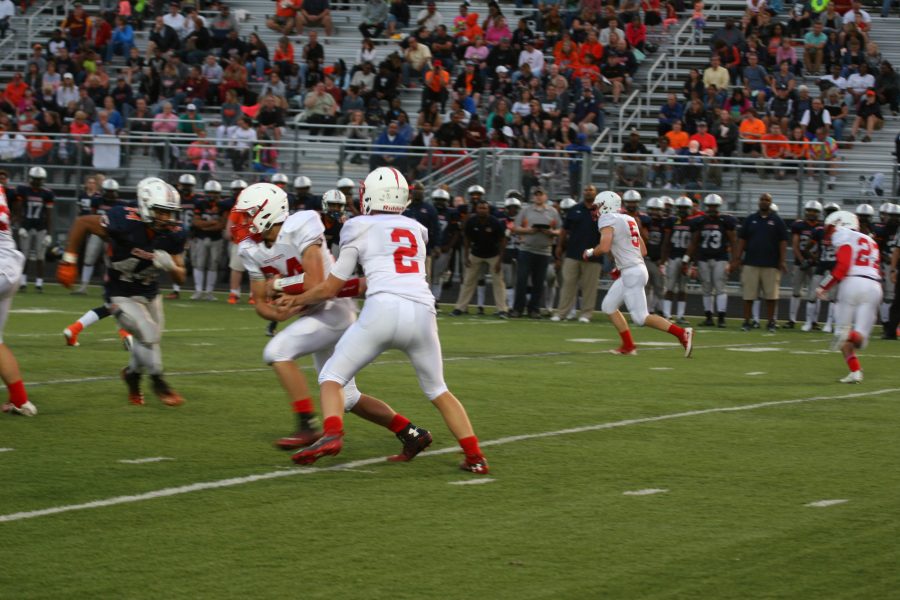 Senior quarterback Will Whitmore hands the ball off to senior running back Alex Houlihan, in the Red Knights' first road game of the season against Robbinsdale Cooper.

After an unbelievable 27-6 win over Orono in the season opener on Friday, September 2, the Football team is looking to repeat as Section champs and make it to the State tournament again this season.

The Red Knights showed great resolve in their comeback win over Orono, but the team still sees much room for improvement going forward.  “On defense we know we can come together even stronger as a unit by trusting teammates to complete each of his own assignments,” senior captain Eric Wilson said.  “On offense we know that we can perform better simply by bettering our communication skills along the offensive line, pointing out and telling our teammates which individuals we will block on every play.”

The team this season does have to deal with the loss of seniors that helped them to reach the State tournament last season, but they do have plenty of new talent to fill their shoes.  “Big senior losses were two-way players Cole Jacob and Riley Simonetti and one-way players Jameer Anderson and Charlie Wolfe.  However, filling some of these roles will be sophomores John Landry and John Whitmore, senior Alex Houlihan, and senior Ryan McTigue, who is making his first football outing since 8th grade,” Wilson said.

Not only is the team practicing every day after school for nearly three hours, but they also worked out early in the morning in the summer as well.  “We had morning workouts every weekday in the summer from 7-9 where we lift and run on the turf (it’s called FAST).  We practice after school now from 3 to nearly 6 every day,” junior captain Braeden Fitzgerald said.

Not only do the players exemplify hard work and talent day in and day out, but the coaching staff leads by example as well.  “The coaching staff really pushes each team member to be the best he or she can be, whether it be on the football field or every day in the classroom. They always provide positive motivation that drives each team member to do their best,” Wilson said.

If the team will make it to the State tournament again, they will have earned it, as the regular season is filled with tough matchups for the Red Knights.  It’s gonna be a hard schedule just like last year since we play 6 teams that are in the AAAAA and AAAAAA divisions for football, while we are only a AAAA team since we’re a smaller school,” Fitzgerald said.  “It ends up helping us in the postseason because it gets us ready for smaller teams through working hard against bigger schools.”

The Red Knights plan to reach their goals for the season not by calling on one player to carry the team, but rather for everyone to do their job to help the collective team to succeed.  “Really the main thing this year for our team isn’t the individual but everyone needs to do their job of either blocking, tackling, running the ball, or knowing [their] reads in the game because if we are missing one of those key elements or if a player doesn’t do the right thing on [a] play it can really cost the team,” Fitzgerald said.

The Red Knights look to take a step forward from their State quarterfinal appearance last season, as they strive to hoist the State championship trophy at US Bank Stadium in November.  “Our goal is always to win the state championship, and we plan on doing that by being the most hard-nosed and dedicated team in the state,” Wilson said.