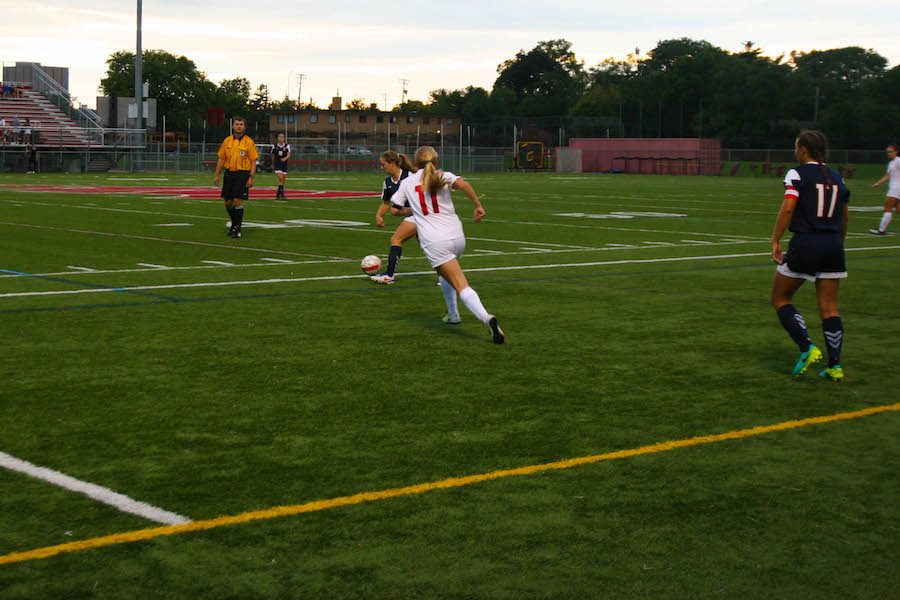 Junior midfielder Claire Van der Heide chases after an Orono player in pursuit of the ball during a 4-1 win.

A year after the BSM girls’ soccer team stormed the field in ecstasy after winning the State A title in St. Cloud over Orono, the team is doing everything they can to repeat as state champs, which would be their fourth title in five years.

The team has started the season 4-1, with a loss against Hill-Murray but wins over Breck, Blake, Orono, and Hopkins.  “So far our team has performed very well against Blake and Breck,” senior captain Maria Van Hove said.  “Those are two great wins to have in the beginning of the season.”

With any state title run, senior leadership usually takes over.  That was certainly the case for the Red Knights last year, so this year the team is without many graduated seniors who played a key role on the team.  “We graduated our whole defense (Emily Schmitz, Taylor Gelling, Lauren Gustafson, and Lauren Goldstein) so that was definitely a change adjusting from last year.  We also lost Aleksa Tataryn and Sophie Roux who were huge offensive threats and scored lots of goals,” Van Hove said.

Even though the team lost these seniors, they have plenty of talent that will step up and fill their shoes.  “Even though we lost a lot of talented seniors, we have very talented sophomores, juniors, and a freshman. Our defense is looking strong again with [2 out of out 5 wins] being shut-outs and Claire Grazzini is playing great!” Van Hove said.

The team has not trained just during the season; rather, the players have trained throughout the offseason as well, in preparation for the season.  “Most if not everyone on the team plays club soccer.  All of the girls are committed to getting better on and off the field,” senior captain Maren Noble said.

In addition to the players, the coaches also have longevity and the knowledge of what will help the team to reach its fullest potential.  “Our coaches Scott and Anne (Coachie) are the absolute best. They have been coaching at BSM for a long time and always know how to help us improve,” Van Hove said.  “They are great at helping us to play to our strengths and improve our weaknesses. Having lots of experience, they help us to stay focused and composed throughout the season.”

The team’s schedule is loaded with tough opponents in the early part of the season, but it gets easier as the season goes along.  “We have already played a few of our tough games of the season and have more to come.  So far, we have played well as a team and are slowly starting to learn each others’ strengths,” Noble said.

The whole team needs to step up for the team to reach its goals, but a couple of juniors in particular will be called on to be major forces for the team.  “We have a lot of great players on our team this year.  We are really looking for Maddie Stoks and Claire Van der Heide to be key players.  We hope that they are great offensive threats and can score some goals this year now that they have more of a leadership role as juniors!” Van Hove said.