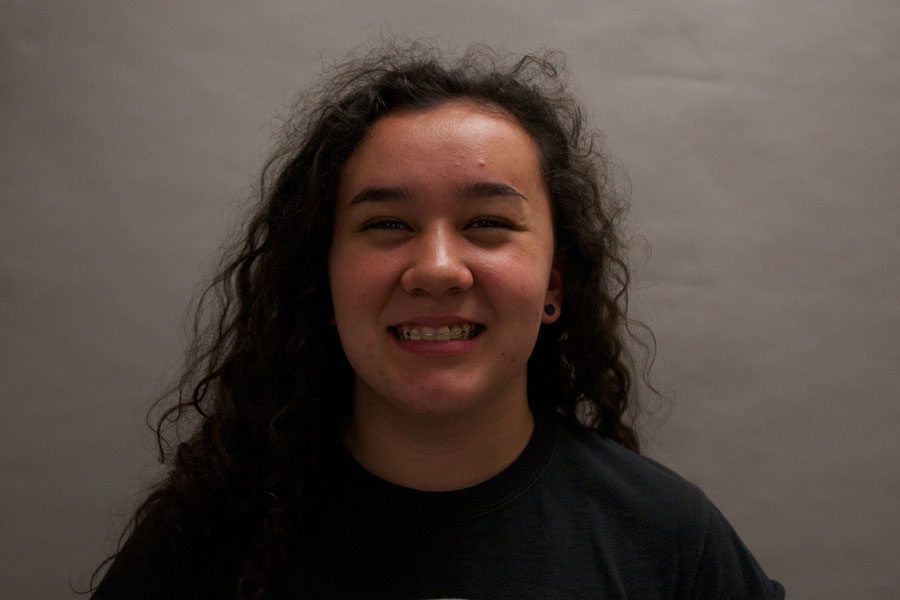 “Ana lives her life with passion. I’ve seen her eat her food with such passion.” Ms. Becca Meagher

Ana struggles with a massive bite of eclair, and I tell her I thought she was supposed to be gluten-free. She replies, deliberately into the recording device, “To get to the best things in life, you have to put yourself at a bit of a risk. It’s more fun that way.” Ana Vigil––musician, artist, oracle––lives fiercely and ceaselessly. A small person who projects a massive existence, she is loyal, reckless and entirely unique.

Ana’s passion (besides “every single thing”) is human contact: “Making relationships, stabilizing them and keeping them interesting.” Ana’s life is spent seeking new friends and caring for old ones. Once Ana counts you part of her family, the amenities are boundless; she is eccentric company and a stalwart friend. She attributes her loyalty to her family.

+ If Ana were a meal she’d would be a burger. Like a nice Burger Jonesey burger. But there’d be some cheese curds on her. It’d be eclectic. Also some hot sauce––not like Frank’s. Like some artisan hot sauce.
+If Ana could be anything she would be a hip hop dancer.

The Vigil family has lived in four different states these past eighteen years. They are a tight, resilient, indestructible unit. They’re like The Godfather family in miniature; if you mess with one of them…well. Ana thus values loyalty in friendship above all things. “I think that comes from my family, my brother mostly. He’ll basically do anything for me just because I’m family. And I hope the people I’m close to know that when it came down to it, I would do anything to help them,” Ana said. I must say here that Ana’s unconditional companionship is incomparable and has been transformative to a large and nonspecific variety of people at our school these past four years.

“It’s probably a Mexican thing” seems to be how Ana categorizes any trait of hers or her family’s that she has particularly tender feelings towards. She is wholly proud of her Mexican heritage and affectionate of her family’s culture. “If I have friends over, they’ll call me out, and give me a nice yell in Spanish and send me on my way. The food is probably better. Mexicans are very lively––very caring, and hospitable. That’s important––like if anybody walked through the door my mom would make them food.”

She is of course bilingual, speaking a dialect of “spanglish” at home or when she’s really tired or blinded by rage. “I don’t notice it. Sometimes I switch to Spanish and I don’t even notice. My brain is Spanglish. Probably when I get upset I talk or think in Spanish. It’s definitely easier to speak vulgarly in Spanish,” said Ana.

Ana is similarly passionate about creation––generally any project she finds interesting will dictate the whole of her momentary attention. The problem is her non-stop creativity and the sheer quantity of her inspiration. “I don’t really get things done. I think it’s an overdose of ambition. When something isn’t happening how I want it to happen I just move on to another thing. I have all sorts of unfinished projects and ideas. I built a motorbike in middle school and then it got stolen. Joke’s on them: it probably exploded,” said Ana.

Personal expression is and has always been a part of Ana’s life––as natural and purely intentioned as eating and sleeping. I asked Ana if she had ever thought about being a professional artist. She said “I’d love to do art always for the rest of my life, but I don’t think I’d ever try to make a living out of it. It’d be too forced.” Then she made a face like I offered her a moldy crust of sandwich and concluded, “Nah.” It’d be appropriate to mention here that Ana is currently failing her photography class despite the fact, she alleges, that she has “thousands of pictures I could turn in, but I just don’t want to.” In case you haven’t picked up on this by now: Ana doesn’t sell out. No way.

Music specifically has been of spiritual immediacy and importance to Ana since her childhood. “My dad would take my brother and I to these horrendously boring concerts––like ‘The Flute Philharmonic of Jackson del Florida!’ It just became a part of everything everyday. It was just always there,” said Ana. After a remarkably early exposure to punk music and a hearty dose of pubescent angst, Ana’s main form of musical expression became the bass guitar. She has been in several bands since. “I’ve met a lot of cool people, and I’ve had a lot of experiences through it,” said Ana.

Here is the meaning of existence as according to this old, battered soul: have as much fun as you can. And make sure everybody else is having as much fun as they can. “It’s like if you go to a concert. Everyone’s dancing and having a good time and you accidentally push someone over. It doesn’t have to be something bad if you just help them up,” said Ana.

Ana will be attending Evergreen State University in Washington this fall. In years to follow, what Ana will miss most about BSM is talking about “Game of Thrones” with Mr. Pauly.