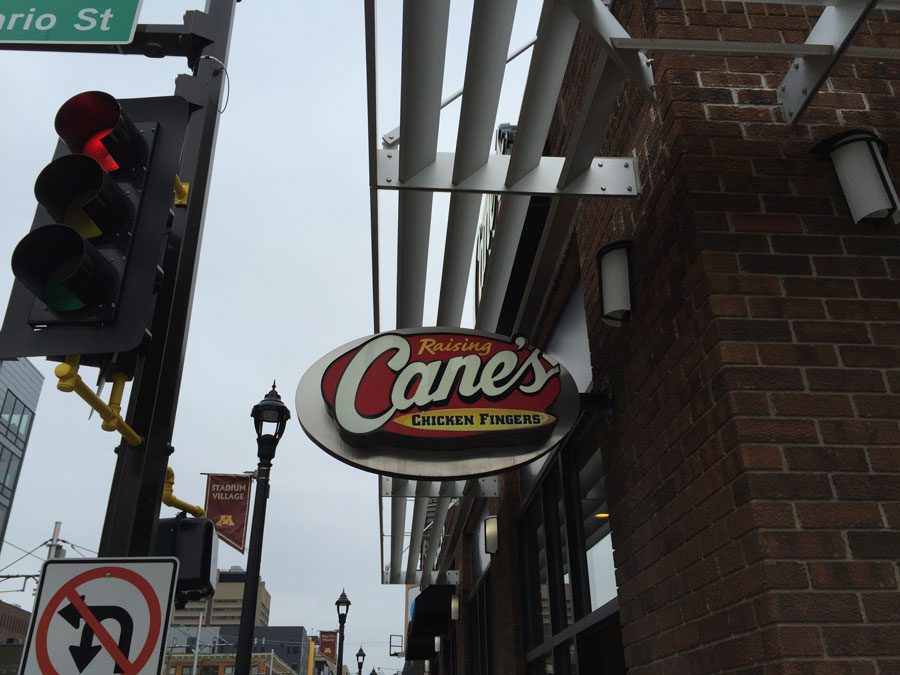 Raising Cane’s has multiple restaurants, including it’s location on Washington Avenue in Dinkytown in Minneapolis.

Raising Cane’s is a small, trendy campus restaurant located in Dinkytown that specializes in fried chicken, and food critics have collectively celebrated their delectable chicken.  The restuarant has become extremely famous in the Twin Cities but in all honesty, it doesn’t deserve the amount of praise it has received.

Raising Cane’s opened in 1996, but has only very recently become popular with BSM students. Raising Cane’s was started by Todd Graves, who worked for years earning money until he finally got enough to start his first restuarant. Since then, Raising Cane’s has opened a multitude of restaurants around the Twin Cities area.

The restaurant, located just down the road from The Barn, is quite small, which makes it feel cramped because of how many people were in the restaurant. Furthermore, Raising Cane’s seemed understaffed—there was a long line of people waiting to order their food, and only two cash registers. Still, the atmosphere of the restaurant made it feel almost homey. There was loud, popular music playing and funny photos of dogs on the walls with interesting facts about the restaurants.

Cane’s most popular dish is the four piece chicken basket. It comes with chicken, fries, and Texas toast. It’s important to note that the food tasted fantastic, but the main thing is that it in no way matches the amount of praise that it has received. The food was made fresh and that puts it over most fast food restaurants, but beyond that, it wasn’t that exceptional.

Cane’s, although famous for their chicken, isn’t  that much better than most sit down restaurants. One could get a meal that tastes just as appetizing somewhere else. To be fair, the Texas toast is much better than Dairy Queen’s and might be the best Texas toast in the Twin Cities, but the main draw of the restaurant is the chicken, and it wasn’t as good as many people say it is.

Overall, Raising Cane’s has a fun and inviting atmosphere, with fresh and flavorful food. Even though it doesn’t match the amount of rave reviews it receives, Cane’s is worth a trip at least for the experience.